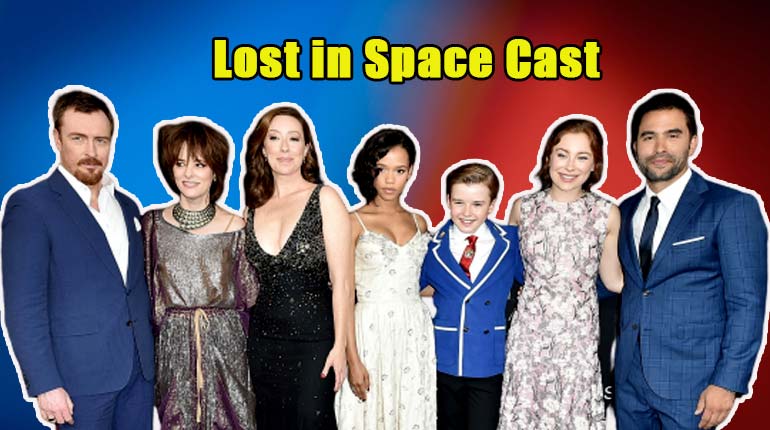 Here’s the good news for the fan of “Lost in Space.” Lost in Space Season 2 is back on Netflix that premiered on December 24, 2019. In the first season of the series, the Robinsons family’s space crash-lands on the alien planet and fights against all the odds to escape but left fans with a dramatic cliffhanger.

Here’s you need to know about the season two cast, including their net worth and relationship status.

Who are All the ‘Lost in Space’ Cast for Season 2?

Canadian-born actress Molly Parker plays the roles of the aerospace engineer who takes her family on the mission to colonize Alpha Centauri in hopes of making a new life in a better world. In the series, she is the wife of John Robinson and the mother of three children. Molly is best known for her role as Jacqueline “Jakie” Sharp in the Netflix series “House of Cards.”

Born in Maple, British Columbia, Canada, Molly Parker currently resides in Los Angeles, California. From age 14, she has been performing in local productions and later flew to Vancouver to study. In 1993, she made her debut on-screen with a minor role in the comedy film ‘Just One of the Girls.’

In her career, she played various roles in the television as well as films. Before landing her first significant role in the drama ‘Waking the Dead,’ she starred in the 1997 thriller mini-series ‘Intensity.’ Furthermore, she earned many prestigious awards nominations. Molly Parker accumulates a net worth of $2 million. He was married to Matthew Bissonnette in 2002 and separated in the year 2009. After seven years, they ended their marriage in divorce and has a child.

Another main cast of Lost in Space is Toby Stephens played as John Robinson, a former US Navy Seal, opposite Molly Parker. British-American actor has appeared in numerous televisions and movies. Toby gained prominence form his role as bond villain Gustav Graves in the 2002 film ‘Die Another Day.’

Toby started his acting career in the year 1992 after his graduation. He starred as supporting and recurring roles in many TV shows. He made his debut as a lead character in the film ‘Photography Fairies.’ Further, he has had a recurring role in TV series, including The Tenant, Jane Eyre, Vexed and more.

Also, he starred in movies such as Orlando, Space Cowboys, Possession, The Machine, and more.  The actor has a net worth of $4 million. We are pretty sure that Toby makes a handful of salary from the series “Lost in Space.”

Stephens tied the knot with New Zealand actress Anna-Louise Plowman in 2001. The couple has three children; Eli Alistair, Tallulah, and Kura. In addition, he and his wife performed together as Elyot and Sibyl in the comedy play of ‘Private Lives.’

American famed star Maxwell Jenkins is widely known for his role as Young Will on Netflix’s sci-fi series ‘Sense8.’ Then he gained the attention of the viewers through his portrayal of Oliver on ABC sitcom “Betrayal.”

Maxwell is playing the role of Will Robinson, youngest son of Maureen. Will has a tight bond with Robot, which he saves from destruction during a forest fire. American child actor Jenkins was born on May 3, 2005, to parents Jeff Jenkins and Julie Greenberg. He is currently studying in school.

Jenkins started his career in acting at the age of eight in 2013. He also appeared in the film ‘A Family Man’ as Rayan Jensen. Further, he will play the character of Joseph Bell in the upcoming movie ‘Good Joe Bell’ that is set to be released in 2020.

At a young age, Maxwell makes a handsome amount of worth from his acting. However, his net worth is still under the radar. Some sources claimed that Jenkins’ estimated net worth is to be between $500,000-$1 million.

Judy Robinson, 18, is the eldest child of Maureen and John Robinson. Judy serves as a medical doctor in the Netflix series ‘Lost In Space.’ Canadian actress Taylor, 25, is known for her role in the film Wave. Also, she acted along with Brittney Wilson, Bradley Steven Perry, and Tyrel Jackson Williams in the 2014 TV film “Pants on Fire.”

Russell rose to prominence after she starred in the Netflix sci-fi series ‘Lost In Space’ in 2018. Her TV series and movie credentials include Strange Empire, Dead of Summer, Escape Room, Down a Dark Hall. You can see her in the upcoming movie ‘Escape Room 2’ that will be released in 2020. She is currently busy filming ‘Words on Bathroom Walls’ and ‘Dr. Bird’s Advice for Sad Poets.’

The young and beautiful actress has managed to keep her life secret. With five feet four inches tall young actress seems to be more focused on building her career in the film industry. Well, she is yet to garner as much as net worth. It is said that Taylor Russell’s net worth is approximately $1 million. Her net worth will surely increase if she continues to work in more films and televisions.

Mina Sundwall stars as Penny Robinson, a middle child of Maureen and John on the Netflix series “Lost in Space.” Penny may not be a doctor like her sister Judy or haven’t a tight connection with an alien robot like her younger brother Will. Maureen’s daughter is a well-trained mechanic.

Mina, 18, is an actress who is widely known for her roles in Maggie’s Plan and Freeheld. The nave New Yorker made her first appearance in the docu-series ‘Celebrity Ghost Stories.’ Her other roles include A Good Marriage, #Horror, and Law & Order: Special Victims Unit.

The gorgeous and talented actress makes good money from her acting. Mina’s net worth is not disclosed to the public. Similarly, she has kept her personal life private.

Ignacio Serricchio co-star opposite Toby Stephans, Parker Posey, and Molly Parker in Lost in Space, the remake of sci-fi master Irwin Allen’s 1965 cult TV classic. He stars as Don West, a roughneck smuggling luxury goods on the side who find the Robinsons family that he never thought he would find them.

Ignacio is well known for playing the role of Diego Alcazar on ABC’s hit series “General Hospital.” He was one of the lead characters of Brandy Norwood’s series “Zoe Ever After.”

Ignacio was born and raised in Buenos Aires, Argentina, and graduated from Syracuse University in Drama. He made his debut role in the daytime soap opera ‘General Hospital’ in 2004. Also, he has a recurring role as police detective Alex Chavez in CBS’s hit series ‘The Young and the Restless.’

He has played in numerous series and films, including El Rescluso, Bones, The Finder, States of Grace, and The Mule. The 37 years old actor is not married yet, but he is already taken. Currently, he is dating partner Gabrielle Stone. Moreover, Ignacio’s net worth remains under review.

Parker Posey is another main cast member of the Netflix series ‘Lost in Space.’ He plays the character of June Harris/ Dr. Smith, a  criminal and psychopath who assumes the identity of her sister, Jessica, to her place in the colony ship. Parker, 51, gained prominence in the film industry during the mid-1990s.

Parker first acted in the 1993 movie ‘Joey Breaker.’ Following minor roles in ‘Coneheads’ and ‘Dazed and Confused,’ she earned the nickname “Queen of the Indies.” The actress studied at the State University in New York, where she studied drama.

Besides films, she starred in the television screen and got her TV role in a daytime soap opera “As the World Turns.” Her notable films and series roles include Party Girl, The House of Yes, Scream 3, The Eye, The Simpsons, and Search Party.

Th Lost in Space actress earns a handful of salary from her acting over the years. As of now, Parker Posey ‘s net worth is around $10 million.

Brian Steele is a versatile actor who established his name by himself in the entertainment industry. The 63 years old actor did odds jobs before steeping to th film industry like bagging groceries, docks, and many more. Currently, he is playing the role of Robot, an alien in the Netflix famous series ‘Lost in Space.’

Brian started his career in 1993 with a series named “Harry and Hendersons,” where he featured as Harry in 24 episodes. In his career, he has worked with big names like Adrian Brody, Tom Sizemore, and Christian Bale. His other notable villain roles such as Men in Black II, Hellboy, Doom, Resident, and so on.

Steele keeps his personal life a low key. There i no information about his love, life, and family. This actor has been actively working in the film industry for more than two decades. His net worth and salary are not known. But we can assume that he makes not less than a million.

Jay Friese plays as Vijay Dhar, son of Victor and Penny’s crush in Lost in Space. He appeared as a recurring role in season one, and now, he plays the main role in season two.

Ajay was born in Victoria, Canada, on April 6, 1998, making his age 21. He holds the nationality of Canada and belongs to Indian ethnicity. He began starring in theater productions at the age of 12. Moreover, he is known for his role as Parker on ReBoot: The Guardian Code.

Ajay’s net worth is not revealed yet. If he continues his acting, then surely in the upcoming years, he makes more net worth.

Zimbabwean born actress Sibongile Mlambo stars as Angela Goddard recurred her role in the first season of the Netflix series “Lost in Space.” She promoted to a regular for Season two.

Mlambo is best known for her role as Tamora Monroe on the MTV series “Teen Wolf.” She played a lead role in ‘Message from the King’ opposite Chadwick Boseman and Luke Evans. She also starred in Michael de Luca’s Under the Silver Lake. Her net worth is not disclosed yet.