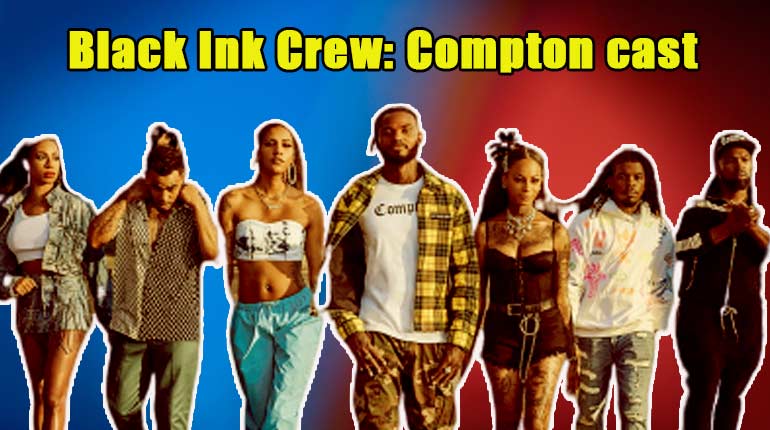 VH1’s latest show, ‘Black Ink Crew Compton’ films in the town of Compton, California. It is the third spin-off of VH1’s reality show that premiered on August 6, 2019. Recently, it has finished its first season.

Danny Kirkpatrick, aka KP, joined the show as the main cast in Black Ink Crew Comptons. Additionally, KP is the owner of the city’s first-ever tattoo shop, “IAM Compton.” He is a tattoo artist, and now, his work sits on the bodies of some big names such as Travis Scott, Nas, Diddy, and many more.

If you follow him on Instagram, then you will see numerous photos of his work. Besides owning a tattoo shop and TV personality, KP is a rapper and songwriter. During an interview with Nick Cannon in the show, Close Conversations, he talked about his music career and has been in the music industry for more than a decade.

According to some sources, the estimated net worth of KP is around $500,000, whereas his wife, Kyla Patt net worth, is $2.5 million. He makes most os his income from as a tattoo artist. Moreover, he earns extra worth from his music albums and acting.

Danny Kirkpatrick is in a relationship with actress Kyla Pratt. The couple has two beautiful daughters, Lyris and Liyah.

Black Ink Crew Compton star Lemeir is hailed from Philadelphia. His father was in jail for murder.  After his brother died in a car crash, seeing too many friends killed due to violence and serious brushes with the law, Lemier realized he couldn’t take his life for granted and ate moved to Los Angeles.

After that, Lemeir ran a food truck named Happy Ice along with his girlfriend, Danielle. Lemeir and his girlfriend have a daughter.

In the first episode of the show, he said that he was involved in drug dealing. Lemeir continued, being a great dealer made him a great businessman.

Lemeir got involved in the tattoo industry after he met the Black Ink Crew Compton, KP. Now, he featured along with his KP on the show. However, Lemeir Mitchell’s net worth and salary are still under review.

Nessie is one of the main cast members of the VH1’s series Balck Ink Crew Compton. She is a creative tattooist, lyricist, and muralist. She is a good friend of Lemeir.

Nessie is raised in the suburbs by her white mother. She was born on April 4, 1991, making her age 28 now. After graduating, she pursued her education to become a doctor, but she followed her passion and became a tattoo artist.

Subsequently, she worked hard to prove; she is right in it and made a name for herself in the tattoo industry. In addition to tattooing, she also raps and paints. Furthermore, Nessie has not disclosed her net worth publicly.

Black Ink Crew Compton cast Ink Drippin made his name by himself in the tattoo world. Blessed with a good Looks, Ink is a tattoo artist who makes the ladies go wild. Ink’s single mother raised him, along with his younger siblings in Compton.

Drippin’s parents split when he was eight years old. He sacrificed his childhood life to support his mother financially and got involved in illegal work. After a brush car accident, Drippin decided to leave his trapping life and pursue his art full-time.

Now, Ink is one of the successful tattoo artists and shared his talent to make the shop’s success along with KP, the owner of IAM Compton. Sources reported that the cast makes pretty food fortune from the show around $50,000 buck per episode though the salary of Ink is not revealed yet.

Raised in a religious cult near Seattle, Vudu Dahl is one of the cast members of the VH1 reality series, Black Ink Crew Compton. She left her cult life and moved to Venice, California. Before fame, Vudu struggled to make her name as tattoo art and model.

Dahl is unlike any other artist on the team IAM and draws that highlights the female body, Asian culture, and sexuality. As a pansexual artist, she has covered head to toe with tattoos. Currently, she worked with the tattoo artists and rapper KP in his tattoo shop.

Besides tattooing, Vudu Dahl is a lingerie model and has modeled for several brands. She even posts her photoshoot on her Instagram. The tattoo apprentice makes her wealth from the show as well as her modeling career.

Tim appeared as the main cast on Black Ink Crew Compton that premiered on VH1 in August 2019. He is KP’s cousin, a right-hand man. Tim lives and breathes the IAM Compton brand and does anything to protect it.

Tim and KP born and grew up together in Compton. Like KP, Tim went on to earn a degree and build a career on the gridiron. He played football in college and also played for the minor team. He dropped out of college and returned from focused on helping KP’s music career.

Tim works as a manager on KP’s tattoo shop IAM Compton. His street cred, business acumen, and devotion to KP almost guarantee the success of the team. Well, Tim’s salary might be higher than other staff who work at IAM Compton. Also, he earns more money from the show.

Barbie is a reality star who came to fame after she joined as one of the main casts in Black Ink Crew Compton. She is IAM Compton’s sassy and stylish receptionist. Additionally. Barbie is a close friend of KP. Barbie gives 100 percent without breaking a nail and moving a hair out of place.

Barbie had a tough life growing up in Compton. Her party girl mother abandoned her and raised by her grandparents and father.

The reality star is very much active on social media platforms such as Twitter, Facebook, and Instagram. Her real name is Erice. On Instagram, her name goes by “barbiebabie007,” where she has over 14k followers.

Barbie makes impressive money from the tv show and other ventures. She is the CEO of Shop Vanity. She has clothing online, where she sells the women apparel.

Kyla Patt appeared as a recurring cast on Balck Ink Crew Campton. She is an American actress who is best known for a role as the voice as Penny Proud in the Disney animated series ‘The Proud Family.’

Kyla is a girlfriend of a tattoo artist, KP, and the mother of his children. Pratt gave birth to their first child, a daughter. Lyric Kai Kilpatrick, on 17 November 2010. Again they blessed with a little princess, Liyah Kilpatrick, on August 5, 2013.

Pratt is an integral part of KP’s business and is one-third of the IAM Compton brand. According to Celebrity Net Worth, Kyla Pratt’s net worth is $3 million.

Danielle is a recurring character on Black Ink Crew Compton and also a business partner of Lemeir’s Happy Ice Food Trucks. She and Lemier are in a relationship for a long time. Her relationship with Lemeir has had many ups and downs.

Danielle and Lemeir have a daughter and even shares cute photos of their daughter on Lemeir’s Instagram.

Black Ink Crew: Compton is one of the bunch of many spin-offs of the original Tatto shop based reality show ‘Black Ink Crew: Harlem.’ So far, Harlem, as well as the first spin-off series based on Chicago, were successful enough to earn multiple seasons and counting.

As for Black Ink Crew: Compton is just through with its first season recently. We are still awaiting details but so far it hasn’t been renewed for a new season yet but then again it has not been canceled too. It is too early to tell now but keeps returning to our page where we will hopefully have an update on the new season.