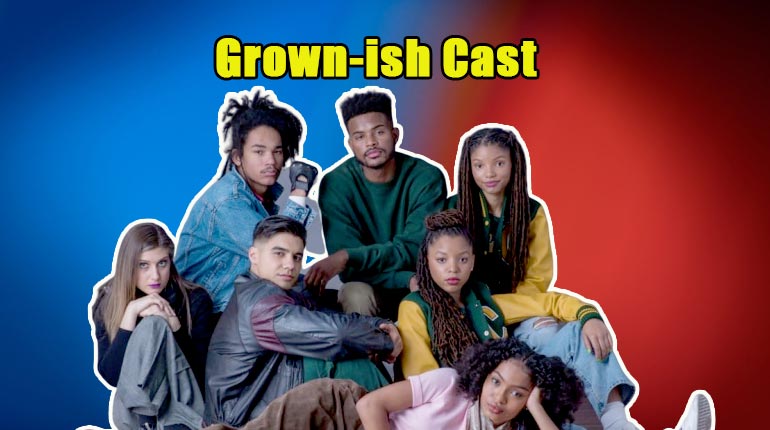 American comedy-drama series “Grown-ish” is a spin-off series of the ABC series “Black-ish” created by Kenya Barris and Larry Wilmore. The series premiered on Freeform on January 3rd, 2018, and season two premiered on January 2nd, 2019.

Starring the Black-ish’s, Zoey Johnson came to Cal U where he met friends like the twins’ Jazz and Sky Foster and Luza Hall, whom she dates in season two. Here we have collected some data of the Grown-ish cast members, including their relationships. Get to know more about them below.

Black-ish actress Yara Shahidi stars as Zoey Johnson, an ambitious and stylish who heads to Cal U to study fashion designing as well as meet six core friends in Professor Telphy’s class, but soon she realized that they are not grown as they think. In season 1, she was a fresher and a sophomore in Season 2. Zoey dated Luca until their break up in season 2.

Yara Shahidi is a model, actress as well as an activist. She earned a nomination for an Emmy and a Golden Globe Award for Black-ish. Full name; Yara Sayeh Shahidi is the daughter o Keri Salter Shahidi and Afshin Shahidi. When she was four years old, her family moved to California. She has two siblings; Sayeed Shahidi and Ehsan.

The 19 years old actress won an NAACP Image Award for Best Supporting Actress in a Comedy in 2014. Moreover, she was highlighted on the Time Magazine’s annual 30 Most Influential Teens list.

The teen actress makes an impressive worth at a young. As of Yara Shahidi’s estimated net worth to be about $1 million. Apart, she makes more money from her modeling.

Deon Cole is one of the most in-demand actors in the comedy scene. Since 2014, he has been playing the role of college professor Charlie Telphy in the series ‘Black-ish.’ He co-stars along with Yara Shahidi in Grown-ish. The actor teaches Digital Marketing Strategies. For his role in Blackish, he was nominated for an Emmy and a Golden Globe.

The native Chicago actor made his debut as himself in the 1998 series ‘Pimps Up Hoes Down.’ From 2016 to 2018, he played the leading role o Det. Daniel Tanner, aka DJ on TBS series “Angie Tribeca.” Moreover, he landed on supporting and recurring roles in many films and TV series, including the Barbershop franchise, The Female Brain, Conan, The League, and so on.

Deon Cole has an estimated net worth of $500,000, but his salary is not revealed to the public. Also, he has a son named Dylan but has not revealed his partner’s identity in the media.

At only 22 years old, Trevor Johnson made his name as a successful singer-songwriter, dancer, and actor Trevor starts as Aaron Jackson, a student at Cal U. In the first season, he was a sophomore and a Junior in Season 2. Most Recently, Trevor starred as a lead role Youngblood Priest in the crime film ‘Superfly’ that directed by the acclaimed Director X.

Jackson first began his acting career with a three-year stint as Young Simba in Broadway musical ‘The Lion King.’ His other notable appearances include Eureka, Criminal Minds, Let It Shine, and Harry’s Law.

In addition to acting, the Grown-ish actor is a singer and released his debut EP “#NEWTHANG” in 2013. Additionally, Trevor released his new LP ‘Rough Drafts Pt.1’ in March 2018, writing all fifteen songs and playing guitar.

He makes quite impressive income from his profession as an actor and artist. Trevor Jackson has a whopping net worth of $2 million.

American actress Franci Raisa rose to stardom after she featured as young cheerleader Leti in the movie “Brig It ON: All or Nothing.” Most recently, Franci cast as Analisa “Ana” Patricia Torres, a roommate of Zoey Johnson, and later they moved to an apartment with Niomi. In Grown-ish, she is the girlfriend of Aaron.

Raisa starred as Adrian Lee in ABC’s family drama ‘The Secret Life of the American Teenager’ from 2008 to 2013. Continuing the development of her acting skills in projects such as Dear White People, The Mindy Project, and Beyond Paradise. Aside from acting, she featured on Iyza’s music video ‘So Big’ and MAX’s ‘Gibberish.’

Francia was born in LA, California, and is of Honduran and Mexican descent. In 2017, the actress donated one of her kidneys to her best friend, singer, and actress Selena Gomez, who had lupus. The Grown-ish actress Francis has a net worth of $3 million.

Jordan is originally from Edmonton, Alberts, Canada. He earned a degree in performance arts from the University of Alberta and has performed in more than 15 stage productions. Later, he flew to Vancouver to make his career in the film industry.

A few months later, he landed on projects, including Letterkenny. Mainly, Buhat is quite active on Instagram that goes by @jordanbuhat.

Emily Arlook plays the role of bisexual Jewish Nomi Segal in ‘Grown-ish.’ Nomi is a freshman who hasn’t come out of her family until season two. The 29 years old actress also acted in projects like Pillow Talk and Big Time Adolescence.

Emily grew up along with her two siblings Rachel and Ethan, in Los Angeles. After she trained at the Lee Strasberg Institute, she appeared in the film, such as Just Add Water, Mary+Jane, The Good Place, and Hand of God.

Moreover, she starred in Refinery 29’s original web series, “Shitty Boyfriends.” Besides, she created and starres in Funny or Die’s original short “Home.” Arlook’s net worth is believed to be around $700,000.

Chloe X Halle Bailey is a singer and actress. She is the part of contemporary R&B duo, ‘Chloe x Halle’ that formed with her sister. Along with her twin sister, Halle, she role our their debut EP “Sugar  Symphony” in 2016. The duo gradually earned the fame after they sang the cover song of Beyonce, ‘Pretty Hurts.’ Subsequently, the duo signed to Beyonce’s Parkwood Entertainment and also nominated for Grammy Award for Best New Artist.

In addition to music, she took the role of Jazz Foster whereas Halle as Skylar Forster in the series ‘Grown-ish.’ The twins’ sisters are a student at Cal U. She made her appearance in films and series such as The Filming Temptations, Meet the Browns, Austin and Ally, and Gospel Hill.

Further, Chloe and her twin sister Halle lent their voice to the song ‘This Is For My Girls’ alongside artists such as Kelly Clarkson, Missy Elliott, Zendaya, and others. The 21 years old singer’s estimated net worth is said to be $1 million.

Chris Parnell plays the role of Dean Burt Parker in Grown-ish. Dean is also omi’s uncle but left the university before season 2. We hope, he returned in the upcoming season. Chris caught the attention of the people after he was cast in ‘Saturday Night Live’ in 1998 and remained in the show until 2006.

Parnell pursued a BFA from the Unversity of North Carolina School of the Arts and then moved to Los Angeles. He landed a job in th company ‘The Groundlings’ and began doing several commercials and a guest role in the sitcom, including Seinfield and Murphy Brown.

In addition to his work on SNL, Chris starred in the film like Down with Love, Walk Hard: The Dewey Coxe Store, and The Dictator. As well, he appeared in tv shows, including 30 Rock, Big Lake, and Suburgatory. He makes handsome money from his acting. Chris Parnell ‘s net worth is said to be $3 million.

Luka Sabbat appears as Luca Hall, a student at Cal U and a stoner in Grown-ish. Luca is an independent guy, as well as a trendsetter. Coincidently, he worked as an intern with Zoey at Teen Vogue. In the series, their friendship-turned-relationship, but sadly they broke up at the end of season two.

In addition to action, Luka is a model, influencer, stylist, and entrepreneur. He is well-known for collaborating with some of the top fashion brands and designers.  The young actor earns most of his wealth from his acting and his fashion designing. As per sources, Luka Sabbat’s net worth sits on $3 million.

Another cast of Grown-ish is Diggy Simmons, who stars as Douglas Frederick Edwards, aka Doug, Jazlyn’s boyfriend. He is also the best friend of Aaron and Vivek. Twenty-four years old Diggy is an actor, singer, and rapper. He had his first mixtape called ‘The First Flight,’ released in 2009. To date, the rapper has dropped three mixtapes, two albums and several singles.

He has a recurring role in the 2012 comedy film ‘Parental Guidance,’ starring Billy Crystal and Bette Midler.

Goodbyes are never easy. After the end of Grown-ish Season 2, fans are eagerly waiting for season three. The series is the most-watched show on the cable. The show was renewed for the third season on February 5th, 2019. Bustle reported that the Grown-ish Season 3 would premiere on January 16, 2020. Below we also have a promotional video for the new season of Grown-ish featuring the main star Yara Shahidi aka Zoey Johnson.

Caption: Yara Shahidi as Zoey Johnson in the season 3 trailer of Grown-ish