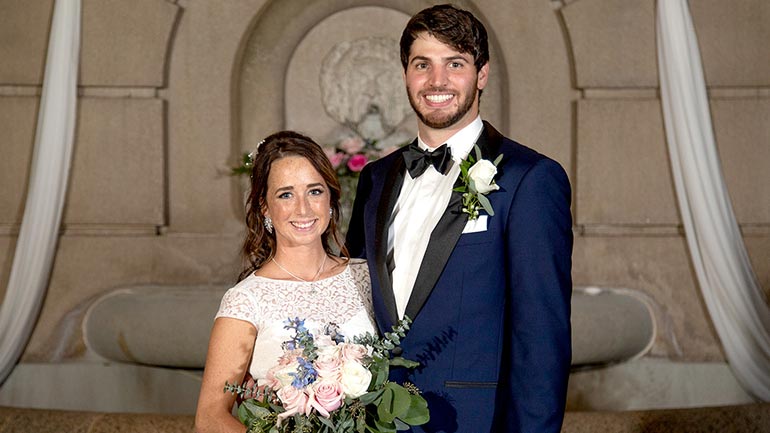 Can Love happen after marriage? The Lifetime Network’s reality series ‘Married at First Sight’ is trying to prove that definitely, it can. The show is exactly as the name suggests, four couples are strategically brought together to get married. They will then take the entirety of the series to decide whether they should remain getting married or go their separate ways.

Despite what you may think, the show actually has a reasonable rate which gave us some adorable couples who have not just remained married but started a family. In season 10, the duo of Kati Conrad and Derek Sherman is confusing us with mixed emotions on whether they will make it through or not.

Here is what we know about Derek Sherman and Katie Conrad so far;

Both Katie and Derek’s Parents are Divorced

MAFS does not just pitch a couple together without making sure they have certain similarities with each other. Nothing is more bonding than coming out of similar family backgrounds. Both of Katie and Derek’s parents had a divorce, Katie’s father later remarried, but her step-mother was also equally a parent to her.

Being children of divorce, it was only natural for both of them to grow up prioritizing a stable family. They have both now come to ‘Marriage at First Sight’ in hopes that the show and the experts will find both of them the partner and relationship that they yearn.

Derek is a Hopeful Romantic while Katie is a Realist

The divorce may have made Derek and Katie hold similar high-standards towards family, but their lives have taught them two different things about love. Derek, who comes from a tight-knit military family, has kept his hopeful nature in finding love. You can call him a hopeless romantic who still believes in “the one” despite his claims that he has never fallen in love with anybody.

His bride, on the other hand, has had rotten luck in finding love. She has come to MAGS after a long struggle in her dating life. So, we can say that she is a bit of a realist. Yes, they are quite different on that matter, but it wouldn’t be interesting without it right. Let us hope that opposites do attract.

Katie Conrad Hides a Blast from the Past

It wasn’t even the second episode when Katie Conrad would drop a bombshell on her groom/husband about a big blast from the past. Yes, Katie Conrad was carrying a big secret through all of the couple’s marriage at first sight weddings. She would go on to reveal it to her current co-stars Meka and Mindy.

She starts off the topic, firstly discussing ex-boyfriends and the goes on to say, “For me, it’s been a little bit complicated.”

The 25-Year-Old went on to speak about how her casual relationship. Her then-boyfriend was clear on not wanting anything serious. Katie, who as we know values marriage and family applied for ‘Marriage at First Sight.’ However, after her ex came to know of her actions, he did what, according to Meka, was “a typical guy behavior.”

Out of the blue, he tells her he loves her, and the revelation understandably leaves Katie’s co-stars in shock. Katie further said that his confession made her have second thoughts. It gave her a hard choice between a man she loved but let her down in the past and a man she knew nothing about but will show commitment.

This revelation did kind of paint Katie to be a bad guy among some viewers. It did look like she would cause a lot of drama, but luckily, nothing of that sort has happened yet. We hope that this blast from the past remains in the past.

Experts Don’t Have Much Hope for Katie and Derek

Like us, even the experts have their head-scratching about what would happen to Katie and Derek. They sometimes show promise and sometimes show no future in their relationship. Who better experts then former couples of MAFS to give us their insight?

Well, former couples did watch all the couples, and most of them did not think that Derek and Katie will make it through. Danielle Bergman and Bobby Dodd were clear that they did not see them together, but Ashley Petta and Anthony D’Amico think that they might have a chance considering this is just the start.

Caption: Katie and Derek are not favored to end up remaining married

Despite Everything, they are still Together

We have only told you all the significant things that happened for Derek Sherman and Katie Conrad. It might sound grim, and we can’t lie; their relationship until now also has its flaws. However, that being said, they are still married, and both of them are trying hard to make it work.

Katie’s co-stars and best friends, Meka Jones, and Taylor Dunklin, have already called it quits on their marriages. They will soon make it official with a divorce if not an annulment, but Sherman and Conrad are still going strong. We hope the two make it at least until the end of the show, if not for the rest of their lives. Maybe like Derek, we are also hopeless romantics.