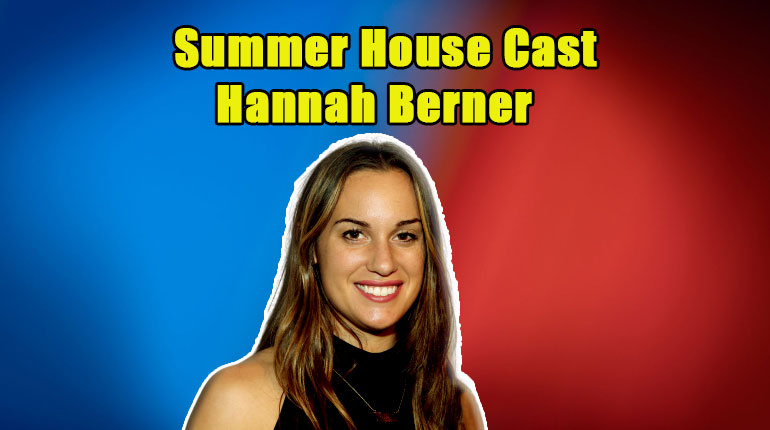 Have you been tuning the Bravo’s reality series “Summer House” that filmed in Hamptons? After the success of season three, Summer House is back on the television with the original cast, and it adds two new casts. Summer House season 4 premiered on February 5th, 2020, at 9/8c on Bravo Channel.

Hannah Berner, one of the original cast will be back for the craziest summer of their lives. On the show, she has shown some of her tennis moves from the first episode.

Find out everything about Hannah Berner. Is Hannah dating a guy from the Summer House?

What is Hannah Berner Best Known For?

The gorgeous lady loves making videos that perked her interest in doing a show like Summer House. Eventually, Hannah rose to stardom after she appeared as cast on Summer House. Besides, Hannah is known for her own podcast called Berning in Hell, where she interviews her guests about their anxieties, fears, and insecurities.

Hannah Berner Net Worth; How She Earns Her Money?

Hannah is a multi-faceted lady. Berner is a TV personality, comedian as well as a podcast. Berner grabbed the attention of the people through the Summer House, so it takes a little time to estimated her income.

Aside from the show, she does other jobs from which she makes a decent salary. However, we couldn’t find her actual net worth, but some sources claimed that Berner estimated net worth is around $1 million.

Before the Summer House, she worked for the Betches Media Company as a Creative Videos Producer. Furthermore, the reality star earns pretty good money from her social media. She makes between $557.25-$928.75 per Instagram post in 2020.

Who is Hannah Berner Dating?

Summer House Cast Hannah has someone in her life. It seems she has found love with a handsome British guy named Dave. Back in April 2019, she dropped a photo of herself with British Dave on her Instagram and captioned it with a black love emoji. She wrote,

“you guys get to meet British Dave”

The two appeared on the show and said Dave’s height was the one she attracted to. She admitted that he was the first guy she matched with.

She added they have an on and off relationship. However, after Berner flung with an Australian guy, Dave busted and moved back to London. Many followers of her are wondering to know if Berner and dave are still dating. Well, we are not sure whether the two are still together.

On the other hand, Hannah rumored to be dating her castmate, Like Gulbranson. She took to Instagram and wished a happy birthday to Luke Gulbranson with a lengthy caption. Berner added, she’s so lucky to be with him on this journey.

Similarly, Luke shared a photo of two on his social media. He captioned the picture with hashtags, “such a treat to see my girl.”

To know about her current relationship status, see the season 4 of Summer House on February 5th.

Hannah Berner is a Granddaughter of Vera Dil Leo

Berner is a granddaughter of social media star Vera Dil Leo. Her grandmother is quite popular on Instagram, who is 78 years old glam-ma. Berner’s grandmother’s Instagram goes by “nanastillgotit.”

Her grandmother posts numerous pictures, including the images from her young age, but she still looks beautiful today, as her old days.

Speaking of Hannah’s social accounts, she is active on all platforms. Her Instagram username is “beingbernz,” where she has amassed over 180k followers.

Similarly, she has accounts on Facebook as well as Twitter. You can find her posts about her fart jokes, photos, and videos.

Hannah has an athletic body figure and maintained her physique very well. The tennis player has a height of 5 feet 7 inches, but her weight isn’t available at the time. Further, the size of her bust, waist, and hip are unknown.