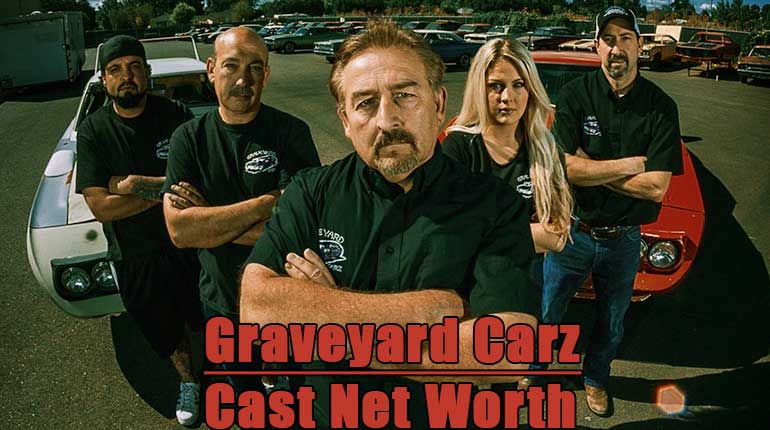 The motto of Graveyard Carz is “It’s Mopar or No Car.” This reality show ‘Graveyard Carz’ rebuilds old vehicles like a Chrysler muscle car from the late 1960s and 70s, and brings it back to life with new models and designs.

The show is created by Mark Worman, who is also the CEO of the independent company that produces the show. This reality show is filmed in Springfield, Oregon, by a TV production company ‘The Division.’ It was premiered in January 2012 on Velocity, and the last episodes of the series aired on June 11, 2019.

The first four seasons of the show featured Mark Worman, Josh Rose, Royal Yoakum, and Daren Kirkpatrick. In Season 2 and 3, Holly Chedester appeared as a recurring cast member who didn’t come back for Season 4. So, what the figure of the show cast net worth and how much they earn per episode? Let’s find out.

Mark Worman is the lead cast member of the show and the owner of Welby’s Car Care. Worman was born and raised in Springfield, Oregon. He also famous as ‘Mopar Guru.’ Worman achieved significant success since he started a car business in 1985.

Mark Worman was born on 21st August 1962, making his age 57. He spent most of his time in his garage. His daughter, Allysa, walked in his footpath and involved in automobiles since early childhood. Mark got his first car 70s Dodge Charger with a 383 two-barrel, and the color as FK5 burnt Orange when he was 16.

The Graveyard Carz creator gained a reputation in the automotive world for resurrecting old cars. He earns enormous money from the shows as well as from his garage. Mark Worman’s estimated net worth is $2 million.

Moving straight towards his personal life, Mark has kept his married life very confidential and has not given any information about his wife.

Royal Yoakum has appeared in the show since the beginning. He is the best friend of Mark Worman. Yoakum has worked in the industry for many years and lots of experience in this field. As per sources, Royal is a very kind and quiet guy who likes to keep things in himself and doesn’t talk much about his personal life.

Yoakum was born on September 3rd, 1962, in Springfield that makes his age 57. Currently, he lives in Veneta, Oregon. He worked with his fellow at his garage Welby’s Car Care, where he worked on the dead cars to create a new model and sold them to the customer.

Aside from that, he is an expert carpenter and had worked in numerous projects in the past. As of 2019, Royal Yoakum’s net worth is said to be around $1.5 million.

Is he married, divorced, or dating someone? Well, Royal was a married man. Though the marriage date and the name of his ex-wife are not disclosed to the media yet, he has three daughters; Mackenzie Yoakum, Stephaine Yoakum, and Leona Yoakum. All of them have grown up now.

At the beginning of the show, Daren Kirkpatrick made his appearance until 2014 and rebuild and creates many new cars during the years. He and Josh both left the show the same year and never returned.

Hence, we couldn’t find any information regarding his birthdate, age, family, parents, and early years. Further, his salary and net worth are not known. It is said that he left the show due to low salary.

No details of his early life, education, and family background are not available. Initially, the net worth and salary of Josh are still under review. His net worth is reportedly placed at $100,000, but we are not sure about it.

Allysa Rose is the daughter of Mark Woman, who started in the first episode as a recurring cast member. She tied the know with Josh Rose, and both appeared on the reality tv show ‘Graveyard Carz.’ Well, rumored to be around that the couple split, and some viewers even speculated that they officially divorced. Allysa and Josh have two adorable kids.

After divorce, she began dating a new hunk whose name is Chris Wanke and welcomed a daughter in 2015. Hence, it is unknown whether the two are still in live-relationship or got hitched.

Allysa makes her income from the show and as a car mechanic. Being a girl, she doesn’t mind making her dirty and greasy. Rose’s net worth could be around $100,000, but proper data to back that claim is still not available.

David Rea joined the show a few years back. Thus, Rea has not revealed much information about him on the camera. He has been cast in 48 episodes of the Graveyard Carz.

He earns a good amount of salary from the reality series. However, the net worth of David Rea is under the radar.

Will Scott Net Worth

Will Scott is another cast member of the Graveyard Carz. Scott was a painter and used color the cars who had been part of the original concept for the series. He was cast in the show in the year 2015. Most of his earnings come from his shows as well as paid a good salary by Mark. Scott earns a whopping sum of $2000 per episode. Moreover, his net worth is $80,000.

Talking about his personal life, Will is a married man and has six children. When he was not working, he spends some time with his lovely wife and kids.

Graveyard Carz Cast Controversies and Who Left The Show?

The Graveyard show is full of drama, hard works, the role of different cast members and controversies. Mark’s daughter Allysa and son-in-law ended their marriage after being married for years. Sources claimed that Josh left the show because he didn’t want to share the same platform with his ex-wife Allysa while some others said that low payment was the reason.

The show’s fans have several questions regarding the show, especially about the new season. Such as; When Graveyard Carz Season 11 will premiere? Is the Graveyard Carz renewed or canceled for the new season on velocity? When is the release date? Has it even been renewed yet?

Yes, Graveyard Carz has indeed been renewed for season 11. The newest season premiered at the end of March and will soon conclude too. Now don’t start asking questions about season 12 already.