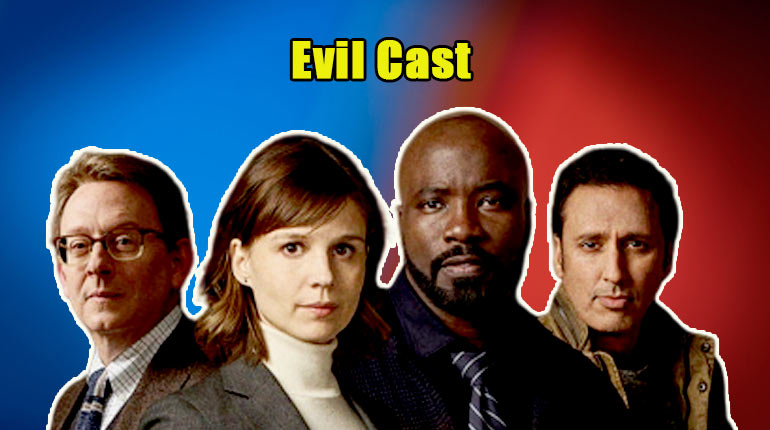 If you loved watching the supernatural series, then you won’t want to miss CBS’s scariest new show, “Evil.” The series premiered on CBS on September 26th, 2019, and renewed for the second season in October 2019.

The series focuses on a skeptical psychologist, Katja Herbers, who joined a priest-in-training, David Acosta who believes in things that being haunted, possessed. They investigated the haunted place and tried to find out the unexplained mysteries.

Take a look below on Evil‘s cast net worth, short wiki, complete with their bio.

Dutch-born actress Katja Herbers played the lead character of Dr. Kristen Bouchar, a smart and sassy girl. In the series, she was a forensic psychologist hired by David Acosta to help him distinguish between demonic possession and insanity.

Katja is well known for her role as Emily in the hit series ‘Westworld.’ The full name’ Katja Mira Herbers’ was born on October 19th, 1980, making her age 39. Her father, Werner Herbers, was a conductor and mother, Vera Beths was a violinist. The actress can speak three languages and had a Canadian au pair.

Additionally, her tv roles include Manhattan, Baantjer, Divorce, and more. Also, she has had a recurring role in the final season of “The Leftovers and The Americans.”

The Westworld actress has kept her personal life away from the media eye. Moreover, the actual net worth and salary of Herbers are under review. Some sources claimed that Katja has an estimated net worth of $1.5 million. Also, follow her on Instagram and Twitter @katjaherbers.

Mike Colter was cast as David Acosta, a former journalist who hired Dr. Kristen Bouchard to help him in his project on CBS series ‘Evil.’ Colter has gained popularity through his role as Luke Cage in the marvel’s web series “Luke Cage.”

Colter was born in Columbia on August 26th, 1976, and currently, he lives in Los Angeles, California. He is 43 years old. Mike enrolled at the University of South Carolina from where he graduated in theater and then earned an MFA degree in acting from Rutgers University.

Colter first made his on-screen debut in episodes of the television series ER and The Parkers in the year 2002. Additional Mike televisions credits include Blue Bloods, Criminal Minds, Ringer, The Following, and so on. Furthermore, the Luke Cage actor feature in the film “Skin” along with Jamie Bell and Danielle MacDonald.

The Evil actor has been married to wife, Iva Colter, since 2016. Mike Colter’s net worth is said to be $2 million.

Another main cast was Aasif Mandvi, who appeared as Ben Shakir, who works with David Acosta as his technician. Aasif is known for his work as a correspondent ‘The Daily Show with Jon Stewart.’

Aasif Hakim Mandviwala was born on March 5th, 1966, in Mumbai, Maharashtra, India. His age is 53 now. When he was a year old, his family moved to England and later relocated to Bradford. Then, he and his family moved to Tampa, Florida, where he joined the University of South Florida and earned a degree in theater.

Mandvi began his acting career in New York theater. After that, he and his teacher created a critically acclaimed one-person show, “Sakina’s Restaurant,” for which he won an Obie Award.

His televisions and film roles include Blue Bloods, hut Eye, This Way Up, Drunk Parents, The proposal, and The Siege. The Evil actor makes quite an impressive salary from the series and movies. Aasif Mandvi’s net worth is believed to be $800,000. Mandvi tied the knot with his long-term girlfriend, Shaifali Puri, on August 27th, 2017.

Playing the role of the Lynn Bouchard, the eldest daughter of Kristen on CBS series, Evil, Brooklyn, is a 14 years olf actress. Brooklyn has appeared as Kate in the 2013 Broadway production “Annie.”

The teen actress arrived in New York City with her family when she has seven years old. She is the middle child of Angie and TG Shuck and has two sisters, Sidney and Raleigh.

In 2018, the Evil actress made her appearance in the Tony Award-nominated broadway “The Ferryman,” directed by Sam Mendes. Her other theater roles include Matilda, Tuk Ecerlastig, and Harry Potter, and the Cursed Child.

In her leisure time, Brooklyn loves singing and dancing. However, Shuck has not disclosed her exact net worth to date. Moreover, follow her on Instagram @brooklynshuck.

With a height of 6 feet 3 inches, Kurt Fuller is recognized as nerdy director Russell in a comedy film “Wayne’s World.” Fuller was cast as Kurt Boggs, a therapist of Kristen in the 2019 supernatural drama.

Born in San Franciso on September 16th, 1953, and grew up in the agricultural heartland of California’s San Joaquin Valley, Kurt’s age is 66. Fuller attended UC Berkley and received a degree in English Literature. Then he flew to Los Angeles and worked as a realtor in a day and stage actor in the night for ten years.

After struggling for a long time, he landed on a lead role in Steven Berkoff’s ‘Kvetch.’ Gradually, he has gone on to have a successful career and worked worth famous directors like Tony Scott, Iban Reitman, and so on.

He played in movies and tv series like Nailed, Ray, Parenthood, Scandal, Psych, and many more. The Grey’s Anatomy actor is married to Jessica Hendra, a published author and has two daughters named Julia and Charlotte. Further, Kurt Fuller has a net worth of $3 million.

Evil’s cast member Marti Matulis, who portrayed the character of George. On his Instagram bio, he wrote, “Things get glued to my face.”

The detail of Marti regarding his birth date, parents, educational background are unavailable. Moreover, he has managed to keep his personal life into himself. According to his social profiles, Marti has appeared in some tv-series and movies, including Crashing the Drone, The Beneath, and among others.

Marti earns a good fortune from his acting as well as his modeling career. However, he has disclosed his net worth to the public yet.

Christine Lahti joined the cast as of CBS’s series “Evil,” where she portrayed the role of Sheryl Luria, Dr. Kristein’s helper. She appeared on the series along with Katja and Mike in the series. Christine was nominated for Best Supporting Actress for the film ‘SwingShift.’

Lahita was born to American parents on April 4th, 1950, in Birmingham, Michigan, which makes her age 66 now. The actress has played different roles in movies and television. Christine earned her career in the acting field in the late 1980s.

Her other credentials include Present Laughter, The Heidi Chronicles, Housekeeping, Leading Normal, and many others. The actress makes a good income from her profession. She is married to director Thomas Schlamme since 1983 and the mother of three children.

Michael Emerson, who played the role of Dr. Leland Townsend in the TV series “Evil.” He is one of the most prominent villains in TV history. Additionally, Michael is best known for his role in the popular series “Lost.” For his part, he also won an Emmy Award for Supporting Actor.

Michael was born in Cedar Rapids, Iowa, and raised in Toledo. He graduated from Drake University, where he majored in theater. Eventually, the ‘Person of Interest’ actor went to New York City and took a job of retail and an illustrator. Later he earned a master’s degree in Arts from the University of Alabama.

In 1997, he landed an Oscar  Wilde in Moises Kaufman’s Broadway play ‘Gross Indecency: The Three Trails of Oscar Wilde. Moreover, he has guest-starred in many series as well as movies, including The Name of The Rose, Person of interest, and Saw 3D. Michael Emerson as accumulated a net worth of $8 million from her profession.

Michael loves listening to audiobooks and spending time with his wife, Carrie Preston, in his free time.

Young and beautiful actress Skylar Gray appeared as Lila Boucard, Kristen’s second daughter in the series “Evil.” Gray was born and raised in front of the camera. So, she is no strange on the camera. Skylar is the daughter of The Bold and the Beautiful actress Shanelle Gray and Game Change actor David Barry. Additionally, her aunt is one of the famous faces in the TV industry, Ariel Winter, who appeared in the series “Modern Family.”

As a young actor, she appeared in many national commercials and print ads. Also, Gray starred on TV shows like Me, Myself & I, Married, Fresh Off the Boat, and Room 104. Besides, she featured in the film, ‘Now Is Everything.’

At a young age, Skylar makes pretty good as an actress and ads. However, Gray’s net worth is still under the radar.

The Evil actress loves reading books and also enjoys handing out with her sister. Skylar’s birthday is May 2nd. You can also follow her on Instagram @theskylargray.

Maddie Crocco starred as Lexis Bouchard, the third daughter of Kristen. From age 6, he has been studying musical theater, and now, she is 11 years old. She made her first live appearance in ‘Beauty and The Beast’ as Chip.

Additional her theater credits include Young Cossette in ‘Les Miserables,’ Gretl in ‘The Sound of Music,’ Founder in ‘The Little Mermaid,’ and Charlie Buket in ‘Charlie.’

Maddie celebrates her birthday on March 24th. When she is not working, she spent her time with her family. Also, Crocco has a cute puppy named Gigi and plays soccer and knitting. Besides, the young actress raised funds for a local animal rescue center.

Further, the net worth and salary she earned from different sources are not revealed yet. To know more about her, follow on Instagram @maddy_crocco_official.

The Evil cast’s Kristen’s youngest daughter is Laura Bouchard, played by Dalya Knapp. Dalya Knapp has been performing from an age four. Her birthday is on September 22nd.

Since then, Dalya has featured in many commercials and series as well. Currently, Knapp is residing in Northern New Jersey with her family and the youngest of five children.

In her spare time, Dalya loves watching videos on YouTube, dancing, reading, singing, and gymnastics. Recently, the child actress completed an 18-city tour of the USA in the Broadway production of Les Miserables.

Dalya Knapp is active on Instagram as @dalyaknapp, but her mom manages her social accounts. She shares many pictures and videos of herself and with her colleagues and family.

Looking at the Evil cast, we are sure that the series was bound to be a hit. There are not many series that are able to gain confirmation for the new seas0n within a few episodes of their first season. Evil was able to achieve this as the series was confirmed for a second season in October 2019.

While no further details have arrived from CBS about season 2, you can rest easy that the new season will be coming as many excited cast members have also been sharing the excitement over the news like Michael Emerson above. We would like to wish the Evil cast as equally successful season 2 in advance.