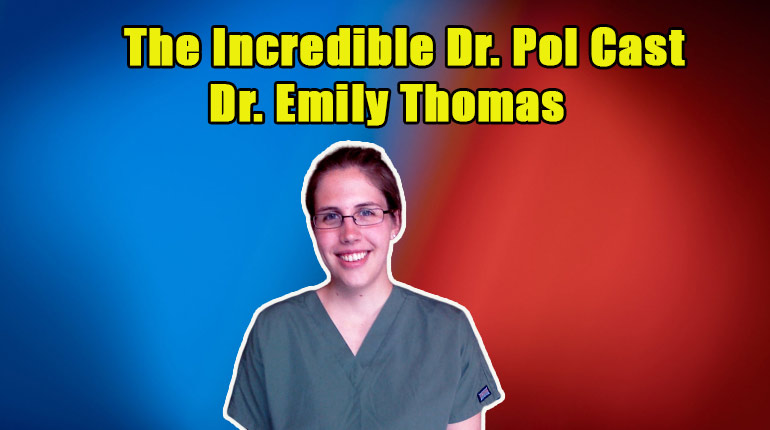 You all have been continuously asking us about Dr. Emily Thomas, who left the show back in 2019, but until now, perhaps even we were in denial as we kept seeing her throughout season 15. It was only when the new season 16 started that we finally realized that Dr. Emily Thomas would not be returning to the show. Knowing Dr. Emily Tomas’s passion for her skills, we are unfortunate to lose her.

However, several questions remain; why did Dr. Emily Thomas Leave ‘The Incredible Dr. Pol’? What is she doing now? And other questions about her married life and children. So, we might be a little late, but we will surely hope to answer all your questions and the desired details in this article.

Yes, Dr. Emily did indeed leave the National Geographic hit reality-docu series ‘The Incredible Dr. Pol’ in 2019. She came under the show’s main star and clinic founder, Dr. Jan-Harm Pol, since 2015 and came to star on the show since season 6. Being a young, highly motivated veterinarian, Dr. Thomas was not afraid to get her hands dirty, which made her an instant hit with the viewers.

Unfortunately, after around four years of working with the great team led by Dr. Jan Pol, Dr. Emily Thomas decided to leave the clinic and the show. Despite having left the show by 2019, she still had shot enough episodes to make it into the season 15 of those years, which viewers may be well aware of.

Why did Dr. Emily Thomas Leave’ The Incredible Dr. Pol’?

The exact reason as to why Dr. Emily Thomas left ‘The Incredible Dr. Pol’ has still not been addressed by either Emily or the team of Dr. Jan Pol. However, we did get the idea from Dr. Emily Thomas’s official blog, where she wrote a story on her typical day at the Pol clinic. Long story short, it was pretty hectic, with only a handful of employees attending to a large number and variety of patients.

On top of the short-handed staff, the camera crew did not make it any easier with giving more space to her and other medical professionals. She did not sound like she was angry or upset about it, but it was not a healthy work environment for her.

Dr. Thomas was still thankful for both the medical team and the camera crew. She even swears that some of the camera crew members also became excellent friends to her.

We couldn’t have put it any more plainly than Emily’s own ending words; “I don’t miss the chaos that Pol Vet brought into my family, but I do miss the people (both clients and coworkers) there.”

Will Dr. Emily Thomas Return to ‘The Incredible Jan Pol’?

No, Dr. Emily Thomas will probably not return to ‘The Incredible Dr. Pol’ at least anytime soon. Even though Dr. Emily Thomas was hesitant to come work in Michigan for Dr. Jan Pol, she fell in love with the place. However, if there is anything we learned from Emily Thomas’s blogs, it is that after a long hard early year, she has come to value self-love and health above all else.

The TV life and clinic of ‘The Incredible Dr. Pol’ was just not for her. There have been reports that she is currently working in a clinic in Virginia. Her House in Michigan is up for sale for $160,000, so she has probably burnt almost all the bridges to get back to the Michigan clinic of Jan Pol.

Caption: Dr. Emily Thomas’s Michigan house is up for sale

However, that being said, Dr. Emily Thomas has not had any problems with fellow cast members or the show. So, if she ever does have a change of heart, perhaps Dr. Jan Pol will have his doors open for her.

As we said, there had been some talks of the 35-year-old taking a job at Virginia. We did do some research to find out that Dr. Emily Thomas currently works in the Warren Country Veterinary Clinic and also lives around the area. When she is not working, she spends her off-time with the family to travel or do some fun activities with her husband and children.

She is a married woman, and the name of her husband is Tony, who is also into veterinary medicine. They were high school sweethearts who dated for four years before getting engaged. The former ‘The Incredible Dr. Pol’ star remembers the day perfectly as her husband had lit candles around the house and made her dinner. After some romantic exchange of words, he finally popped the question.

They got married in 2007 and had three children together. Their eldest daughter, India, was born in September 6, 2012, and then their oldest son, Oscar, took birth on August 28, 2014. They gave birth to a third son, Clavin, in 2018. Along with their kids, the couple has four pets, 3 of which Emily saved.

What is Dr. Emily Thomas’s Net Worth? Early Life & Bio

Dr. Emily Thomas was born on August 4, 1984, and raised in Warner Robins, Georgia. So, she is current 35 years old but will soon be turning 36 years of age. Her parents were divorced when she was young, and she later found out her father did not find her mother attractive anymore. This led to Emily as well as her mother grew up with unhealthy self-awareness towards their weight.

Her parents’ divorce also led to her having insecurity and overthinking towards relationships. Even she and her current husband Tony broke up twice temporarily for just an hour or two when they were dating. Luckily she was able to keep the relationship intact with her future husband.

She got both her Bachelor and Veterinary Degrees from the University of Georgia and first started work at a mixed-animal practice in South Carolina. Emily would later complain about the job mainly due to a stingy boss. Her second job, you know it, was with Dr. Jan Pol, which was also the part of the show.

Although veterinarians don’t make nearly enough for the effort they put, maybe because of her TV career, Emily Thomas has a net worth estimated to be around $500,000. This is all about Dr. Emily Thomas that we have for you today. We hope we were able to satisfy all your questions and curiosities.