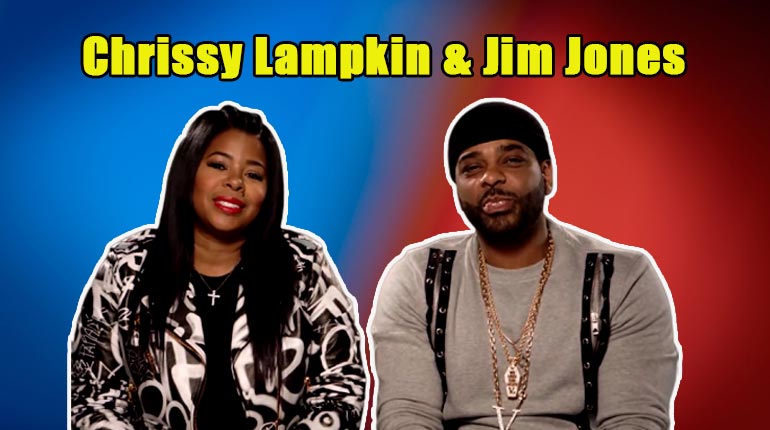 All young women grow up dreaming about their wedding and married life. However, love is much more complicated than the fairytale we conceive for ourselves as children. Some people never find true love to get married, but for Chrissy Lampkin, getting married seems to have become superficial. So much so that she does not want to tie the knot with her longtime boyfriend.

Find out why Chrissy Lampkin is not married to her boyfriend even after years of dating to the point they are already acting like husband and wife. Also total info on Chrissy Lampkin’s net worth and bio;

They have been engaged twice, though. Strangely, it was Chrissy Lampkin who was the first to propose to then-boyfriend Jim in season 1 of Love and Hip Hop: New York. The fans were content to hear that, and we’re hoping to listen to the wedding bells ringing for the couple very soon.

The following season, Jim Jones further made the fans even more ecstatic when he also got down to one knee to propose to Chrissy Lampkin, this time more traditionally, and he even brought gave her a ring. While fans thought this would be the last nail to the coffin but also their second engagement was over eight years ago in 2012. Which begs the question, are they ever getting married?

Chrissy Lampkin’s Happy to be not Married.

Lampkin, everywhere she goes, is swamped with questions about her married life. In the past, she has expressed her desire to get married, but it was clear something changed along the way. After a long time, Chrissy Lampkin obviously has had a change of heart.

Even after the 48-year-old designer’s grand return to LHHNY, her relationship with fiancé Jones is still her central story, and they are still not married, so nothing is that different. In a clip, we see Jone and Lampkin discussing their marriage.

Chrissy doesn't think that marriage completes her relationship to Jim. Would YOU be okay never tying the knot with your significant other? #LHHNY pic.twitter.com/tdZLd7Rc44

Recapping their entire relationship, Lampkin says, “After that proposal, we didn’t get married because we weren’t ready and you’ve asked for marriage after that and I wasn’t ready. We’re still together. We have a crazy bond; nobody can tear it apart.” She continued, “We’ve been together, what, a million years? And if the marriage never happens, I don’t feel a way about it anymore because marriage doesn’t complete us.”

Jim Jones is Happy to be a Husband

Jones did not fully comply with his fiancée’s words though expressing his wishes to get married.

“I do want to get married,” he said.” I believe every woman who’s in love or is in a healthy relationship deserves to have that.”

However, the LHHNY star is able to gain the upper hand asking him what would change if they got married. We hate to disagree with Chrissy Larking here, but we agree with Jim here. Why not make it official; people would die to get a longtime relationship like theirs. They are practically married as well after being together for around 16 years. Many fans also think the same as per some of the response it got.

She's fooling herself..she knows damn well she.wants to be a wife..
I don't see what the big deal is..all they have to do is go down to the city hall and make it happen.#alwaysagfriendneverawife

Exactly, and I'm not spending 20 years to be listed in an obituary as his longtime special friend. Thats when family show you that aren't anyone but a girlfriend. But to each his own.

Chrissy Lampkin’s married life, in the end, is a private matter, and we will leave her and, hopefully, her soon-to-be husband Jim Jones to deal with it. In the meanwhile, let us focus on Chrissy Lampkin’s net worth. Chrissy Lampkin was the original member of ‘Love and Hip Hop: New York’ but only was the main cast in season 1 and season 2. After years, she made her grand return in the newest season 10 of LHHNY.

However, even when she was not one of the main stars of the Bravo reality show, she was still a successful designer who was busy with other projects. The reality star is foremost a designer both career and passion wise; she runs the clothing line, Lady Vamp, similar to her fiancé Jim Jones’s clothing line Vamp Life.

Even if you consider, Chrissy Lampkin’s net worth will not be impressive without her reality career; you may be right. Chrissy Lampkin’s net worth back in 2012 was estimated to be around $700,000. Since then, while she left LHHNY, she still appeared in two spin-off series centering her and her boyfriend-turned-fiancé, Jim Jones that are ‘Chrissy & Mr. Jones’ and ‘Jim & Chrissy: Vow or Never.’

The couple also came in a past season of ‘Marriage Boot Camp.’ So, Chrissy Lampkin still has been a reality star in other projects. Her net worth for 2020 in under review, but the source estimates it to be $350,000. However, since Chrissy Lampkin has finally made her much-awaited grand return to ‘Love & Hip Hop: New York’ which would mean her net worth is bound to grow.

Chrissy Lampkin was born in 1971 on April 27. She will be turning 49 years old very soon in 2020. Lampkin was born in Harlem, New York City, New York, to parents of Cuban and Afro-American ethnicity. Chrissy has one sister, but we have no information on her sibling. Check out her childhood photo of her and her father before you go. You can follow her on Twitter and Instagram for more such interesting pics from her life.