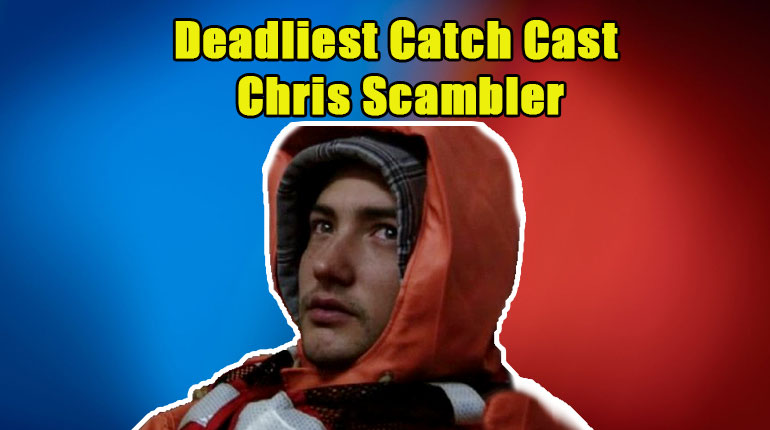 How often have you seen a young dad risking his life to earn some decent money for his family? Well, there are many brave examples of such people, and Chris Scambler is among them. Despite not having seen the ocean ever in his life, he took the offer on the Wizard on Discovery’s Deadliest Catch.

In this article, let’s talk about his Scambler’s married life, children, and net worth. What illness does he suffer from? Chris Scrambler’s health updates along with the rest of his wiki and bio.

Chris Scambler was born in 1992 in the United States. He is 28 years old as of 2020. As of his bio, he belongs to white ethnicity and holds an American nationality. Besides this, there is no information about his early life. Also, his personal life is still under wraps.

Deadliest Catch is a Docu Soap Reality television show which is running in its sixteenth season at the moment. The long-running series is aired on Discovery Channel. This show is all about the lives of the fishermen during the rough seasons in the Bering Sea. It also follows the crew’s attempt to gather valuable commodities, including the opilio and the massive red king crab.

This is among the deadliest job in the entire globe, and we often get to see some horrible accidents. Talking about tragedies, we get to see some severe injuries and fatal accidents while the sinking of other ships is also normal.

The show made its first debut in April of 2005. Since then, the fans have witnessed some action-packed adventures and particularly dangerous weather conditions. The show aired the first episode of its 16th season on Tuesday, April 14, 2020.

Deadliest Catch’s Chris Scambler takes a job on the Wizard.

Chris Scambler had never seen the ocean, so a sea storm was far from sight. Despite his lack of expertise in the field, he joined up for the Discovery channel’s Deadliest Catch. However, it turned out to be his greatest mistake.

As his first shift began, he was already terrified halfway through the first day. He was so ready to quit, but Captain Keith Colburn convinced him enough. It was all about Scambler’s efforts for his daughter and his family. So, to his credit, Chris went back on deck to resume his shift.

Nearly two weeks in the sea, and he takes a dramatic turn. He already suffered from severe dehydration and went into convulsions. So, the captain had to take a significant call and inform the Coast Guard for an immediate medevac. Chris had shooting pains in his arms and necks, so without a doctor on the ship, the measures had to be taken.

What happened to Chris Scambler on Deadliest Catch?

You can never predict the disasters happening on the reality show. Chris Scambler is a previous crew member who spent only over two weeks on the crab boat. Well, he had a dramatic exit from Deadliest Catch back in 2012.

He was a newcomer with zero experience, and the high seas turned out to be extremely bad for the trainee. He was working under Capt. Keith Colburn, at the moment, but not even the experienced captain, could help him out.

Amidst the dangers, Chris was well aware of the potential risks. His shooting pains turned into convulsions in no time. The fact that there were no doctors on deck made this more dangerous. His health kept on declining, so the captain had to take charge.

He made a call for an immediate evacuation to have his crew airlifted to a nearby hospital had him rehydrate. Following this incident, the captain decided to remove Chris from the Wizard. He made an apology to his captain for his inconvenience. However, Keith was moderate enough to understand his pain, and he only wanted Scambler to get well.

Chris was lucky enough to get away with his life, and he also had a great crew on the ship. The man is doing completely fine at the moment, but he prefers to stay away from the ocean following his tragedy.

Chris Scambler is a Married Man and he has a Daughter

Chris Scambler is married to his wife, and the couple has a daughter. Well, there is no detail about his married life or any other personal info. The name of his partner or child has not been mentioned anywhere on the internet. However, Captain Keith said that the man has a daughter. The captain reminded Chris of the type of person he would want to be for his daughter, and that is how we know about the fact.

We don’t have any details on Chris Scambler’s career besides his short journey in Deadliest Catch. He might be from a poor family but nothing can be said. Also, it’s quite difficult to assume his net worth.