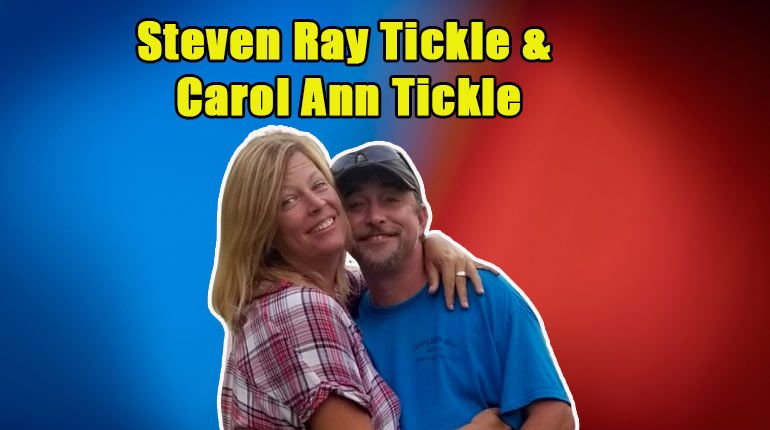 If profession was a factor for determining compatibility among couples, you would never expect the one we are going to talk about right now. Yes, it is about Steven Ray Tickle, who got married recently. If you are a fan of ‘Moonshiners,’ you already know a little about Tickle. You know him as an infamous Moonshiner whose business endeavors have put him behind bars for a lot of time.

Chance Encounter with Husband & His Criminal Past

Fans of Moonshiners may only recall Carol Ann Tickle as the wife of one of their favorite cast members Steven Ray Tickle but who she is has everything directly to do with how she met her husband. Carol Ann Tickle just so happens to be a bounty hunter. Yikes!

Since Tickle happens to be in the business of illegal moonshining, he has a lot of people on his tail, including bounty hunters like Carol Ann Tickle. She was the one who was tracking him or, according to Tickle, instead,

“she was hunting another fugitive, but it appeared the only place she was putting any work in was me.”

Despite Tickle’s televised actions of cooking up some of the country’s best Moonshine, you have to catch a moonshiner, red-handed to arrest him. So, he has been arrested twice in the past for entirely different actions like public intoxication in 2013 and possession of an illegal firearm in the form of a sawed-off shotgun in 2015.

He probably caught the attention of his bounty-hunting wife from his previous misdemeanor as he was given a 3-year sentence for the latter one. You wouldn’t expect private law enforcer falling for the fugitive she is hunting every day, but rarer things happen, don’t they?

Carol Ann Tickle married her husband, Steven, on October 19, 2019. It wouldn’t be a Moonshiners’ wedding without some of it going around, and the entire theme even happened to Moonshine. As Distractify wrote, “From wood to copper fixtures, down to the shimmering bronze dresses bridesmaids wore, it all looked very moonshiney.”

Even among the guest list were Tickle’s prominent ‘Moonshiners’ co-stars Tim Smith, Kenny Law as well as former moonshine partner Howie. Thanks to so many names in Moonshine, there was no shortage of liquor in the wedding with a little bought by everybody, including Steven Ray Tickle.

Discovery, as well as the bride, Carol, was very open in sharing the pictures of their romantic wedding. Her husband couldn’t seem happier, and why wouldn’t he be? His wife-to-be had the entire function sorted out from making the centerpieces to closing costs, and all him having to do was come to the wedding.

Moreover, we even heard that they were looking for a new home for them. We are a little late, but we would like to wish the married couple a long and lasting marital bliss.

We don’t know her birth date and age yet, but she is from Chuckey, Tennessee. As a 12-year-old kid, she moved to Virginia, where she still currently settles in Danville since July 2019. She may have been married in the past as she is a mother of 4 grown-up children from ages 20 to 26 years.

She also has three grandchildren, and her oldest son is serving in the United States Air Force. Furthermore, she has also now become step-mother to Steven Ray Tickle’s daughter Daisy Tickle, 17 from his previous relationship. All of her children, including Daisy, were present in her wedding, as seen in the picture above.

We got most of this information from her Facebook bio, where we also got to learn some of her hobbies. It includes fishing, bowling, and poker in her free time.

Carol Ann Tickle’s net worth remains under review. After all, we only came to know of her, after her marriage with Steven. Her Husband, Steven Ray Tickle’s net worth on the other end, is easy to comprehend to be approximately $500,000 as of 2018. His net worth is probably more in 20020, judging from his overall salary.

Steven Ray Tickle is estimated to have earned around $1 million from ‘Moonshiners’ and $175,000 from his other show ‘Tickle.’ However, his wife has her own successful career. Not only is she an owner of a Bonds company and a bounty hunter but also a realtor. We are sure she has an impressive net worth as well, but for now, it remains a mystery. Do come back as we will surely have her net worth soon enough.