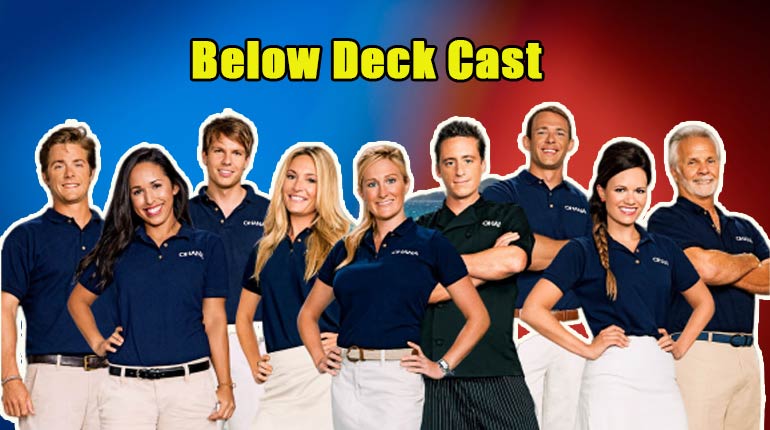 “Below Deck” is one of the most popular reality show on Bravo Channel. The show first premiered in April 2012 that created by Rebecca Taylor Henning and Doug Henning.

It outlines the chronicle of the lives of crew members who worked and resided in the mega yacht during the whole season. Further, the crew members also deal with personal issues to make their career work. In every episode of the show, it features a different group of guests.

Let’s know who is in the cast? How much the crew members earn during the season and tips from the guest? To know more about the Below Deck, take a look below.

Lee Roabach is the main cast of Bravo’s “Below Deck.” Rosback is an experienced captain and has been working in the yacht industry for more than twenty years.

Born and raised in Saginaw, Michigan, Lees discovered his love for the water. At the age of 35, he received the captain’s license. Before that, he worked in Turks & Caicos, and later, he left the restaurant business and followed his passion and get into the Yacht business. Some of the mega-yachts he worked in include 163 Cuor di Leone, 140 Just Enough, 16 Cuor di leno, and Many more.

The reality star makes a good fortune or himself from his profession as well as from the show. As per sources, Captain Lee makes between $95,000 to $130,000 salary a year. Although the network hasn’t disclosed his salary per episode of Below Deck, Lee’s net worth is said to be $300,000.

Kate Chastain has been part of the Below Deck since the first season. She is Captain’s Lee’s right-hand woman and is the Chief Stewardess of the show.

Chastain was born in Florida and had our siblings. Her parents were separated when she was a kid, and later her mother remarried Michael Hastey. Kate began her yachting career in 2007 as a third stewardess. She fell in love with th exotic and exciting industry and decided to work in the yacht before continuing her higher school.

During the job, she traveled throughout the Carribean, Central America, New England, and the Mediterranean. Also, she is known for planning and lavish executive parties. Kate Chastain makes a salary of thousands of dollars. She is likely to get paid around $75,000 annually. The less experienced chief stewards on smaller yacht make $40,000 a year, and large vessels make over $90,000. Kate Chastain’s net worth is approximately $300,000.

Further, she earns extra money from the book she authored. She wrote a book titled “Lucky Charming,” published in 2016. In 2017, she launched a nonprofit upscale resale store, “Genesis Boutique.”

The reality star Kate is dating Josiah Carter from 2018. She previously dated her Below Deck co-star, Rocio Hernandez.

Ashton Pienaar rose to fame after he was cast in Below Deck season six as Deckhand. Pienaar is originally from South Africa, and at the time, he also worked as a male stripper. During the season, he has an affair with Ross Inia, another crew member of the show.

The couple was called as a bromance. Ashton and Ross ended their romance at the end of the season. Later he started dating Laura Betancourt and also spent a few nights together. However, at the season’s reunion, Laura said that they were just good friends.

Pienaar luckily survived after the accidentally gone overboard. He stepped on the towline that pulled him out to sea. The cameraman of the show saw him drowning and jumped into the sea.

He earned a bachelor’s degree in Entrepreneurial Management from the University of Johannesburg. After graduation, he got a job as a Senior Verification Analyst at Simunye, where he works for two years. Later, he joined Frog Production, and then moved to Oomph! Where he worked as a client service and sales manager.

However, the net worth of Ashton Pienaar is not revealed. Also, the salary he earns from the show is still under review.

Simone Mashile is the newest cast member in Below Deck Season 7, who works as Second Stew with Kate Chastain. Before Below Deck, she worked with fashion models as well as her own YouTube Channel.

Simone is from a highly academic family but has a free-spirited and adventure love personality. She pursued her degree in mathematics but eventually faded from office life. Hailing from South Africa, whether work or fun, she traveled all over the world and also shared pictures of her adventures in California, Italy, France, and Cannes.

This reality star is into fitness and often shares workout tips, exercise routines on her Instagram. According to her bio, Simone Mashile’s life motto is “I am the master of my destiny, I am the captain of my soul.”

Kevin Dobson Net Worth and Salary

Kevin Dobson is one of the cast members of the Below Deck. He may be new to the Valor and the show but has vast experience with food and cooking delicious meals.

When he was 12, Kevin began his career in culinary with his parents at their house outside Lake Tekapo in New Zealand. At a tender age, Kevin worked at a local bakery and went to culinary school by age 14. With his strong work ethic and perseverance, he went to Australia and the USA.

Later, Kevin decided to took his culinary skills to yachts and worked for some of the large boats sailing the Mediterranean, Pacific Islands, and the Caribbean. Furthermore, the chef shares his recipes on his social media.

According to his Bravo bio, Kevin has a daughter but has no mention of his partner/wife. Dobson flies home whenever he can to be with his daughter.

Brian de Saint Pen joined Bravo’s ‘Below Deck’ in season six as the main cast who serves as the lead deckhand. He was born and raised in South Africa. Living in a coastal town, Brian develop ed a love or water but didn’t get into yachting until he was four.

He has been working aboard yachts in the Mediterranean for many years. He is working towards to become a First Mate/Office on a charter yacht. His life motto is “Vita est Brevis.”

Brian has a five-year-old daughter named Micah. He even posts pictures of his daughter on his Instagram with a lovely caption. It is said that he is dating his co-star, Courtney Skippon. However, the net worth has not revealed yet. As per sources, he makes around $50,000.

Another cast member of Below Deck is Courtney Skippon, who joined as the third stewardess. She was born in Canada and spent most of her life on or in the water. After high school graduation, she flew to France to study business school. Later she embarked on her career in yachting.

While she was pursuing her business degree in Paris, a friend told her she was looking for a second stewardess on a charter boat. Now she will join the cast in season seven. When she is not working, she spends her time at the beach and experiencing everything the new city has to offer.

Talking bout her relationship status, she is probably single and not dating anyone else right now. She earns a good fortune for herself, so she can spend a better life, although her net worth is still under review.

Tanner Sterback has always had a passion for travel in new places and learning about other cultures. He was born in 1993 in Sayville. He attended a college at SUNY Plattsburgh and later moved to California to live with his grandmother.

During his travels, he met people from the yachting industry but didn’t get into it until 2016. Back in 2018, he vacationed in Russia, St. Lucia, and among other locations.

While he lived in California, he also got into acting and modeling. Furthermore, he is an Athlete and played as a defensive player for the college team and was coached the junior varsity team at Cardinal Newman High School. Also, h loves playing football, lacrosse, and basketball.

When not on works, he spends his time with his family, especially grandma. He has a dog named Lulu. He makes around $30,000 salary from the show.

Abbi Murphy was born and raised in the city o Plymouth, in Massachusetts. Later she moved to Boston for college to become a lawyer. She graduated with a GPA and got a full scholarship to law school. Also, she had a job at the Boston Form.

Growing up in the ocean, she was never interested in boating. When she went to Greek for a vacation that completely changed her mind. Sumtaneouely, she quit her job and started learning to sail. Since then, Abbi has been living in Greece and works as a first mate on an Atlantic 61.

The reality star is married to captain Partick at the town hall in Plymouth, Massachusetts, last year. This season, she joins the Below Deck cast Courtney Skippon, Tanner Sterback, Simone Mashile, and Brian de Saint Pern. Like most other casts, the net worth is not disclosed.

Below Deck introduced to Rhylee Gerber as a deckhand who began her initial voyage into the white gloves world of yachting. Rhylee is a TV personality, as well as an adventurer. Since an early age, she is passionate about fishing and has her commercial fishing boat.

Before Below, Deck, she appeared in the reality show “The Last Frontier.” During the show, he lived in Alaska and went fishing. Rylee makes a salary of around $20,000 from Below Deck. However, Gerber’s net worth remains unrevealed.

As a lack od transparency, there is no info regarding her married life and affairs. We consider she is probably unmarried and single. Her life’s motivation is to “live the real life of Rylee.”

Who Got Fired From Below Deck?

As pers sources, hef Kein Dobson or Abbi Murphy would leave the show at some point because they aren’t satisfied with their work. However, they are still on the show and doing their best.

In Season 3, Captian Lee fired chef Leon Walker fired from Below Deck. In that season, Kate Chastain had to cook late-night meals for the guest while he slept. He left the dirty pan inside the oven, which caught fire and almost burnt the yacht.

Caption: Chef Leon Walker causes a fire which will lead to him getting fired

The other crew members who fired from the show include Trevor Walker and Dane Jackson. Some of the cast members quit the show.

When does Below Deck New Season Start?

After the end of season six, the show renewed for season 7 on October 7, 2019. On the show, some of the old crew members returned, including Kate Chastain, Ashton Pienaar, and Lee Rosbach. It brings six new members named Simone Mashile, Courtney Skippon, Brian de Saint Pern, Tanner Sterback, and Abbi Murphy.

Caption: First look at the new season of ‘Below Deck.’

The news is swirling around that Below Deck is looking forward to season eight. It is said that they are searching for new cast members to fill all positions. However, the show hasn’t made any announcement yet.

What accident happened on Below Deck?

Ther are some scariest accident happened on Below Deck but luckily they are survived. Ashot Pienaar went overboard after he stepped on the line to tow the tender. The line wrapped around his ankle and dragged him off the yacht and into the water.

One of the cameramen, Brent Freeburg, immediately put his camera and stepped in to help and save his life. At th time, he was wrong to place at the wrong time, but luckily he survived.