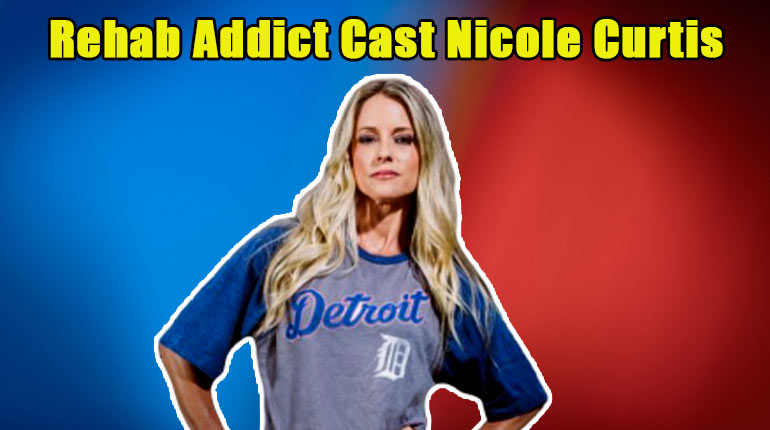 You would never expect a person who restores old houses to be so bad at being able to repair and manage her own relationships. We are obviously talking about the beautiful and smart ‘Rehab Addict,’ star Nicole Curtis. So, it is surprising, to say the least, to learn about her dreadful past in dating and married life.

You have to read it yourself to believe it. Nicole Curtis’ past dating life along with her current boyfriend. Who is she dating now? Read all about Nicole Curtis’s dating life. Also, take the time to explore her net worth and wiki-bio in the article below.

Nicole Curtis has one handsome hunk of a new boyfriend, and you all have to meet him. Her new boyfriend is Ryan Sawtelle, who is an actor by profession. While Ryan Sawtelle does not have a lot of acting credits to his career, the few ones he does are spectacular, though. According To Plan, Game Night, and 2019 Firefighter movie Brave.

Nicole Curtis’s boyfriend is not just a successful actor but also a beauty with a purpose. Ryan is not only an actor but also an executive director of the White Heart Foundation, a non-profit organization initially established to serve the injured 9/11 heroes but also serves wounded soldiers of the American military. The Foundation has other celebrity advocates as well, including actor Rob Lowe and his wife, Sheryl Lowe.

Even outside of his work and his institute’s critical mission, Ryan Sawtelle is a stand-up guy who got the attention of his current girlfriend, Nicole Curtis is the first place.

Ryan Sawtelle took to Instagram in 2017 to write all about his beautiful niece, Arden 7, who was diagnosed with DIPG. Diffuse Intrinsic Pontine Glioma is an aggressive brain tumor found in children with a 0% survival rate till now, and only 1% survives for over five years after diagnosis. Ryan was requesting prayers and support for his niece, and the post reached the good-hearted Nicole Curtis.

Nicole Curtis then would reach out to Ryan to support her own prayers and support. Being a mother of 2, pediatric terminal diseases have always tugged Nicole’s heartstrings. Many may know Nicole Curtis’ own special connection with a little girl by the name of Tessa. Tessa was the daughter of Nicole’s colleague who was suffering from stage 4 Neuroblastoma and became part of an episode of ‘Rehab Addict.’

Nicole Curtis was so touched by the inspirational Tessa that she was even growing out her hair so she can later make a beautiful blonde wig out of it. She, with her family, also did some Facebook fund-raising to help Tessa and her family. Sadly, Tessa passed away in June 2017, but Curtis still keeps her memory alive, and so do her fans.

Such are the tragedies of life, Ryan Sawtelle’s niece also passed away some time ago in 2018. At least in such times, the couple had each other for emotional support. For a couple to go through such an emotional roller-coaster in their dating life means that they are pretty compatible. Hopefully, we get to see the two married, but for now, let them enjoy their dating life in peace.

We are really happy for Nicole Curtis that she is now with her boyfriend, Ryan Sawtelle, because of how rough a journey she has had in the past with her dating and married life in the past. Well, technically, despite being a mother of two, Nicole Curtis was never married. Her first son, Ethan, was born on December 24, 1997, to her first partner Steven Cimini.

We don’t know much about her first baby daddy, but he probably wasn’t a good one considering as a January 2018 report suggests that he owed her almost $15,000 in back child support. Cimini was also almost arrested for this act. On the other hand, Cimini will reveal in her second custody battle, which we will talk about below that Nicole would move with Ethan to California only to return to Minnesota when Cimini followed them there.

However, that does not even compare to her relationship with her second baby daddy and the ugly custody battle between them. Nicole Curtis’ second son is Harper, whose pregnancy she was hiding while shooting her show Rehab Addict. While she revealed the reason for it to be “afraid of people’s judgment,” we think it might be all the drama with her baby daddy.

After all their son, Harper was just 15 months old when they began their ugly battle with his father, Shane Maguire. It was so much drama that we don’t even have a clear idea on the timeline of their whole court trials. It included allegation from Curtis saying Maguire was endangering their son by participating in a Black Lives Matter protest to Maguire requesting a psychological test on Curtis.

Nicole Curtis almost got charged with kidnapping when she took a trip to New York with her son Harper during Maguire’s custody time so she could tether a business deal worth $500,000. Curtis offered to pay for her ex’s plane and hotel fees, but he straight-up declined. Curtis also failed to pay a lot of parenting and attorney fees, which even got her threatened with jail time.

Anyway, the whole debacle was put to an end when the court awarded equal physical and legal custody to both the parties. Curtis will also have to fund $250,000 for Harper’s fund, which Shane Maguire will be able to use to buy a condo within 25 miles of Curtis’ residence.

She will also not take the $1,200 child alimony in exchange for equal custody and parenting rights. Previously, Shane Maguire also won his claim to change their son’s legal name to Harper Wolfgang Lewis Curtis-Maguire.

Nicole Curtis was born in Lake Orion, Michigan, on August 20, 1976. She was born to mother Joan Curtis and her father, Ron Curtis. Nicole Curtis did not have a perfect relationship with her parents and moved out at the age of 17. However, it was not the final time she would hear from her parents.

Nicole’s mother would argue protection against her own daughter, Nicole, and she would do this amidst her messy custody battle we were talking about earlier. At the same time, her father would threaten her with going to press while even sending her a print of his press release. The court did not issue Joan Curtis the protective order, but it goes to show the bitterness between Nicole and her own mother and father.

She, however, seems to have a good relationship with her grandparents as well as her brother, whose name is also Ryan. Ryan Curtis, like his sister, restores old things, but his forte is motorcycles. Her parents were in the garbage business, which is perhaps how Nicole Curtis has an eye for treasure lying in the trash.

Nicole Curtis Net Worth; How much is Rehab Addict cast worth?

She even proudly claims to have an entire house full of furniture and other decors she found in dumpsters. Her motto is that “Only Garbage goes in the Dumpster.” She did this as well as brief time as a Hooters waitress before finding a career in restoring and repairing pre-world war houses.

Throughout her career, she has not just been part of ‘Rehab Addict’ from 2011, which has over 120 episodes through 8 seasons but also various other similar shows. The shows she was a part of includes ‘Home and Family’ and ‘Daryl’s Restoration Over-Hall.’ Over her vast career, Nicole Curtis has surely brought her total net worth to an enormous amount. As of 2013, Nicole Curtis’ net worth is approximately $7 million.

Curtis is able to hold such an impressive net worth thanks mainly to her salary of an estimate of $74,608. We are still calculating her net worth for 2020, but it may be a while before we gain a conclusion. Her recent legal battle has been both rewarding and a loss of hundreds of thousands of dollars, which makes it complicated. Stay tuned for more updates on Nicole Curtis’ net worth and bio.