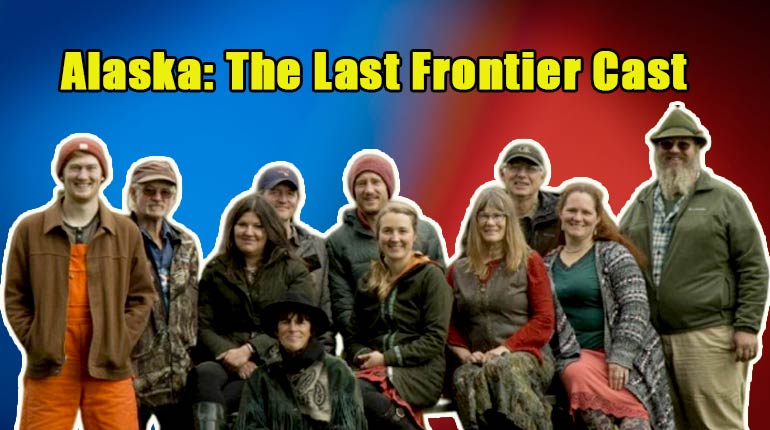 Alaska: The last frontier is a reality TV show on the Discovery channel. A pretty popular one at that, as it already has nine seasons. The show first debuted in 2011. This show follows the Kilcher family, which is pretty big. Kilchers are Swiss immigrants and Alaskan pioneers; Yule and Ruth came to Alaska in the ’40s, where they got 160 acres of land near Kachemak bay. They were one of the earliest settlers in rural Alaska.

The Kilcher family lives without the use of some basic modern facilities in their daily life like heating and plumbing. They live in a homestead near homer, face to face with nature, frontier style. The show gives a lot of tips about the harshness of nature and the ways to survive it. Kilchers work throughout the spring and summer to gather food through farming and hunting for the long, harsh Alaskan winter.

The Kilcher family is related to the singer Jewel Kilcher who has also appeared in the show. Let’s learn more about the cast of the show.

Atz Kilcher is the oldest male of the family and the first son of Yule and Ruth. He had seven siblings, and all of them were homeschooled as they were in a very remote area. Old man Kilcher is also an artist and musician along with being the reality TV show star on Alaska: The last frontier. He is the father of the famous singer Jewel Kilcher. He himself is also a singer and musician.

Atz is the self-claimed protector of the family and spends his time protecting the cattle from the wild predators in the area. He has a home on Homestead but spends his summer with his wife on the head of the bay. This is where Atz fishes for salmon, weave a basket and play music in his spare time while he watches the cattle.

This talented old man is currently 72 years old and has amassed a hefty $5 million net worth throughout his life. A considerable amount of which came from casting on the show. He was born in 1947.

Otto Kilcher is the little brother of Atz Kilcher and 6th child to Yule and Ruth. He was born in 1952 and is currently 67 years old. Otto has been the tinker of the family since childhood and had a curious mind. He is now like the handyman of the Homestead.

Fixing anything that needs fixing, this guy has a ‘Can do’ attitude. Otto makes anything he needs by himself; he turns trash into treasure when he isn’t fixing something. This is also the reason he stresses over reusing and recycling, and it helps that his wife is environmentally conscious.

This jack of all trades has a hefty net worth of $4 million. Casting on the show, his can-do attitude and reuse-recycle habit also helped him without talent like his big brothers. He is a master mechanist and was part of the first expedition to cross the Harding Icefield in 1968 at just 16 successfully.

Otto embraces the self-sustain lifestyle that his parents used to live. He has a herd of cows that he keeps, which provides for the fresh beef for his family. Otto is married to Charlotte Kilcher. He has four kids, all sons, his son’s names are Levi, Elvin, August, and his Torrey. He has made sure to pass on the can-do attitude to his sons.

Elvin Kilcher is one of the sons of Otto Kilcher, and much like his father is a jack of all trades. He also embraces the self-sufficient lifestyle. Elvin lives in a cabin he built himself, and continues to build, along with his wife. He lives half a mile from his father.

His lifestyle includes farming, hunting, and gathering rather than only farming, like his parents. Like his grandfather, he started with one cabin and continues to be resourceful about the resources around him. Elvin is gradually increasing his pasture and farm, even though he mainly relies on hunting/gathering and fishing.

At the age of 35, Elvin has an estimated net worth of over $2 million. It is estimated that he earns $7k to $10k per episode casting on the show, and that is where much of his wealth comes from.

Elvin is married to Eve Kilcher, and together they have written a book which has also contributed to their net worth selling a good sum of copies. They have two children together, Findlay Farenorth Kilcher and Sparrow Rose Kilcher.

Atz Lee Kilcher has a lifestyle that is completely different from the rest of his family. He relies on hunting alone to provide for his family. Unlike his father and uncle, who are into farming and a more stable lifestyle, he likes to get closer to the wilderness.

He had once left the subsistence lifestyle on the homestead looking for a better lifestyle. He had his passion for music and wanted to make something out of it like his father had and his sister Jewel. But after some time in the outer world, he realized that he truly belonged to the homestead. He then returned to the homestead and now lives in a cabin he built himself.

Atz Lee is currently 42 years of age, and despite his hunting and gathering lifestyle has a net worth of over $2 million, most of which comes from casting on the show.

He is married to Jane Kilcher. He has one son with her Etienne Kilcher and a daughter Piper Kilcher from Jane’s previous marriage

Charlotte has always been a nature lover and conscious of the environment. She had been a vegetarian since the age of 13 but had to adapt to the lifestyle of the Kilcher’s after she got married to Otto, as that was the only way to survive in those environments.

Charlotte has also come to embrace the self-sufficient lifestyle of the Kilcher’s, and now herself raises chicken and ducks for eggs, keeps bees, milks the cows, and she loves gardening.

Her estimated net worth is over $1 million, much of which comes from appearing in the show, which pays $7k to $10k per episode to every cast.

She is married to Otto and has four children Levi, Elvin, August, and Torrey Kilcher. Charlotte is currently 60 years old, born in 1959.

Jane Kilcher was once a fisherwoman before she married Atz Lee Kilcher. Her name was Christina Jane Ferman then. She is also a musician and claims she would have pursued it had she not married Atz Lee.

Jane was born in 1975, so she is currently 44 years old. She has a net worth of $500k, which she earned from her fishing days and casting on the show Alaska: The last frontier.

Jane was once married to Dicran Kassouni, whom she has divorced. She had a daughter with Dicran in 2003. She later married Atz Lee in 2005. Jane had met Lee in 2000 and had his son Etienne in 2001. She currently lives with Atz Lee in the cabin, hunter/gatherer lifestyle.

Jewel Kilcher is the only daughter of Atz Kilcher and a world-renowned singer. She as two brothers Shane and Atz Lee. Jewel is the only one from the family not living in the homestead. She became a world-renowned artist, singer-songwriter, actress, author, poet, and producer.

Jewel was born in Payson, Utah, on May 23, 1974, and was raised in Alaska. She left her family and the homestead lifestyle to pursue music, her passion. Just at the age of 21, she had debuted with album “Pieces of You,” since then, she has released more than ten debut albums, and many of them are multi-platinum.

Jewel is currently 45 years old and has an estimated net worth of over $30 million. She appeared on the show in the sixth season as a cast for a few episodes.

Jewel was previously married to Ty Murray, pro rodeo cowboy in 2008. She had a song with him in 2011, Kase Townes Murray. After six years of marriage, they divorced in 2014, which she announced on her website. She currently appears to be dating football player Charlie Whitehurst according to “Entertainment Tonight’s.”

Eve is the hardworking wife of Elvin Kilcher. She currently lives with Elvin together in the homestead. She is very active and hardworking, which is made evident by the work she puts into farming the vegetables for the family.

Eve grows enough vegetables to the last family of three for eight months of winter. Her husband, Elvin, also helps her in doing the chores on the farm. She hasn’t disclosed her age, but she has a net worth of nearly $2 million — most of which she makes from casting on the show Alaska: The Last Frontier.

Eve and her husband Elvin have written a book together, which is priced at $19.89. It has sold many copies that have pitched in to her net worth.

Alaska: The Last Frontier ha its fair share of controversies and some of them are :

Some peoples who have left the show are:

The last frontier, in our opinion, is one of the most underrated reality shows in the world. It has a lot of action and family drama, but still, it falls behind when it comes to popularity to similar branding shows or other reality shows. Maybe that is the reason its fans have such a hard time, being up to date with the new details and updates of the show.

The fans even have a hard time getting early access to information about Alaska: The Last Frontier’s new season. Even we had a hard time informing details on season 9 before its premiere. We might be late, but as they say, “Better late than never.”

The new season of Alaska: The Last Frontier came out following the show’s usual trend of a Fall premiere in October 6, 2019. The new season brought a lot of new challenges for ‘The Last Alaskan Cast as they dealt with climate change and passing down the torch to the next generation. The Kilcher famil’s pastures and farmlands were left a muddy hell when the climate change brought an early spring.

The Kilchers had to find new pasturelands far away. The destination was perfect, but the journey treacherous. Will they be able to get both their cattle and themselves there safely. Watch the show to find out. Moreover, the clan’s young females Jane and Eve toggle their first hardships to gain independence. All this and more are happening, so make sure you do not miss out on Alaska: The Last Frontier’s new season.