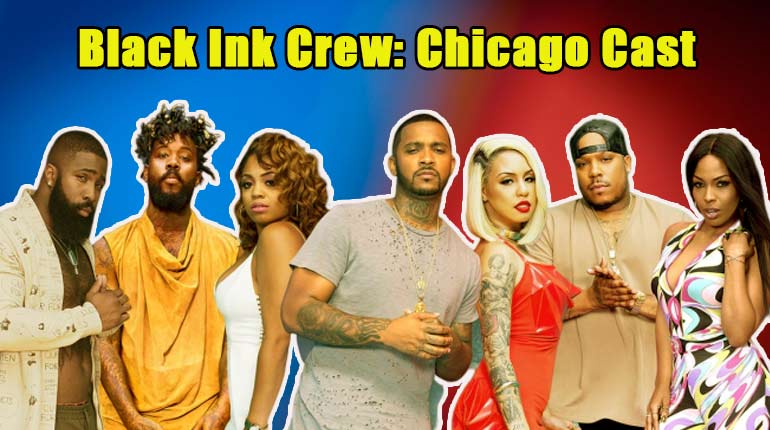 There are lots of reality shows running on different channels around the world — VH1 reality series “Black Ink Crew: Chicago,” is undoubtedly one of them. Now, the show completed its fifth season. The reality show follows the day-to-day operations and drama inside the African-American tattoo shop ‘9MAG’ in Chicago, Illinois.

Let’s get the personal details of each cast like age, net worth, salary, and their marital status.

Starting off the list is one of the main cast of the show is Ryan Henry. Ryan is a professional tattoo artist and also the owner of a tattoo shop, 9MAG. He was born on May 27, 1986, to parents Keith and Loni, which makes his age 33. She has two sisters named Nova and Jill. Ryan opened up that his older sister Nova and ten months old niece Ava was murdered by her late sister’s ex-boyfriend Fredrick Goings in 2009.

After the tragic death of his sister, he went to depression. However, he overcame that incident and focused on his tattoo career. Now, Henry is one of the successful tattoo artists and makes an enormous worth from his profession.

Ryan came to fame after he made his appearance in the reality show Black Ink Crew: Chicago. As of now, Ryan Henry has an estimated net worth of $1 million.

The reality tar Ryan is currently unmarried. In the past, he was in a relationship with his ex-girlfriend, Rachel Leigh, with whom he has a son named Mason.

Katrina Jackson, aka Kat, is the former cast of the Black Ink Crew: Chicago. She skyrocketed as she landed a tattoo gig at 9MAG. Born on May 17, 1991, Chicago, she is their child of her parents and has two brothers; James and Kenny. Kat studied mathematics for three years at the University of Missouri before pursuing her career as a tattoo artist.

Kat is one of the most sought-after female artists. Now, she has opened her tattoo studio called Enigma Beverly Hills. The 28 years old reality star used to make a salary of $1.5000 per episode. Reportedly, she has an estimated net worth of $200,000. Besides, she earns extra worth from her clothing line.

Van Johnson is one of the most skilled and respected tattoo artists in Chicago. Johnson is part of the 9MAG. Due to some reason, Van and Ryan departed their ways. However, both Ryan and Van are part of the Black Ink Crew: Chicago.

Van Johnson was born on July 17, 1983. He is now 36 years old. After graduating from Calumet High School, he went on to Northern Illinois but soon dropped out of college after he had trouble with the law.

Using his talents and skill in the art, Johnson restored drawing tattoos. Before fame, he worked as a tattoo artist for Cold as Ice Tattoos. Van Johnson makes pretty impressive worth from his career. However, his net worth is still under the radar.

The tattoo artist is currently engaged to his girlfriend, Jenn. Also, Van is the father of a teenage daughter, Briyanna, born from his previous relationship.

Phor Brumfield is one of the original cast members of the VH1 series ‘Black Ink Crew: Chicago.’ He remains a resident tattoo artist at 9MAG. Besides being a full-time tattoo artist, Phor is a rapper and released some albums such as Sacrifice and Lightning Bug.

Born on March 21st, 1985, in Chicago, Phor Brumfiled’s age is 32 now. The reality star generates most of her income as an ink artist and some of his income. Over the years, van Johnson has worked with many artists such as Skippa Da Filippa, G Herbo, and more.

Phor is now focusing on mental health, and through his platforms such as a tattoo artist, musician, and social media, he is spreading mental health awareness. The Black Ink Crew Chicago’s Phor Brumfield’s net worth is $150,000.

Currently, Phor is dating a new girlfriend, Sophie Body. Previously, he was in a relationship with his castmates Nikki and Kat.

Don Brumfield is the original cast member of Black Ink Crew Chicago. He is also the younger brother of Phor Brumfield. His Instagram name goes by Bishop Don, where he has over 700k followers.

Don Brumfield was born on September 30, 1987, and his age is now 32. Don is married to his wife, Ashley Pickens. They have two sons named Ashdon and Don Jr. Brumfield worked in management and booking for 9MAG for two years before he appeared on the reality show Black Ink Crew: Chicago.

Further, Don worked as a tattoo assistant along with his brother Phor in 9MAG. Don is famous for his cheating scandals. He had been caught creeping up his castmates Charmaine and allegedly hooking up with stripper in his Bachelor’s party.

It is believed that the reality star makes a considerable amount of cash through his art and appearance from the show.

Charmaine Walker has been on the show as the main cast from the beginning. Born and raised in Louisiana, Charmaine currently resides in Chicago, Illinois.

Walker lost her mother, Glenda Walker, on November 23rd. She announced the news via her Instagram. Her mother’s death was sudden, but the specific cause of death has not been publicly yet.

Charmaine was the part of a tattoo shop 9MAG, a Chicago-based ink shop formed by Ryan Henry. Now, Walker is dating NeekBey and has been living together.

Neek Bay’s girlfriend earns a good fortuned from the show as well as from 9MAG. The TV personality Walker partnered with a British tattoo artist Jessica Simpson and formed a new tattoo shop in Chicago, ‘2nd City Ink’ in Black Ink Crew Chicago’s new season. The net worth of Charmaine Walker is under review.

Mexican-American tattoo artist Liliana Barrios came to limelight after appearing as the main cast on the VH1 series ‘Black Ink Crew: Chicago.’ She has made her name by herself as the feisty, stubborn Latina amongst the crew.

Liliana was born in Chicago, Illinois, and her mother later immigrated from Mexcio to the USA. While she was studying her first semester in college, her father was kidnaped by Mexican Cartels, who demanded 50,000 pesos as a ransom for his return. The net day, Lily got the horrific news that her father was found dead.

Before moving to Chicago, she worked at Ink Masters Tattoo Studio in San Antonio, Texas. While working at 9MAG, she dated fellow artists, Junior Diaz, for a few months.

Ryan was the one to introduce Lily in season three of Black Ink Crew: Chicago and appeared as the main cast in season 4 and 5. According to some sources. Liliana’s net worth is approximately around the sum of $100,000.

The new cast member, Jessica of the Black Ink Crew Chicago cast, appeared in season 6. Jessica left everything behind in London and later moved to Chicago. She aims to be a successful tattoo artist.

Going through her Instagram, she posts numerous pictures of the tattoos that she inked. Besides the show, she is also the co-owner of a tattoo shop ‘2nd City Ink.’ It seems that the tattoo artist makes an enormous worth from her profession. However, Jessica’s salary and net worth both are under review.

The reality star was in a relationship with her former boyfriend, who is serving a sentence in prison related to drugs. Now, her ex from California has released from jail. Will she give a send chance to her ex or moved on her life?

Danielle Jamison joined the show as the leading cast member in season one and made her regular appearance until season 4. In season five, she had a recurring role. Danielle was born on March 19, 1990, and her current age is 29.

Jamison earned a bachelor’s degree in psychology and Sociology from the University of Missouri. Before her appearance on Balck Ink Crew: Chicago, she worked as a receptionist at 9MAG. She is a cousin of Charmaine Johns.

Everyone knows that she was in a relationship with the 9MAg’s owner Ryan Henry. Now, she is busy with her new life. The reality star Danielle is married to her school sweetheart.

Danielle created a lifestyle blog called IAmDaniJ, on which she posts her desired brands, beauty tutorials, and lots more.

As for the number of episodes, we are not sure. Season 5 had a record of 20 episodes, which means season 6 will also feature a similar amount. Since it is currently running, there is no way we can get info on a newer season. Although aren’t you just happy that the Black Ink Crew Chicago hasn’t been canceled. Be sure to catch it’s latest episodes in 8 pm ET/PT